First of all I would like to say thank you to Rock Star Book Tours for allowing me the opportunity to participate in the Blog Tour for Cinderella Necromancer by F.M. Boughan, and for providing me with the free e-ARC in exchange for my honest review! 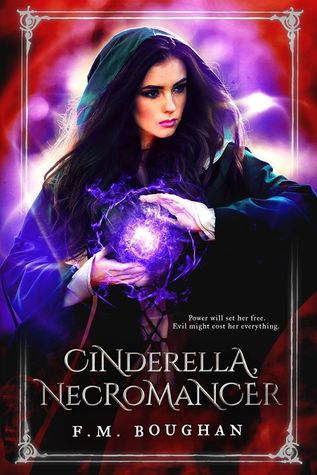 CINDERELLA,NECROMANCER is CHIME meets ANNA, DRESSED IN BLOOD and was inspired by a real medieval grimoire of necromancy from 15th-century Germany.

Ellison lost her mother at an early age. But since then, her father has found love again. He’s happy and doesn’t quite notice that Ellison does not get along with his new wife or her mean daughters.

When Ellison discovers a necromantic tome while traveling the secret passages of her father’s mansion, she wonders if it could be the key to her freedom.

Until then, she must master her dark new power, even as her stepmother makes her a servant in her own home. And when her younger brother falls incurably ill, Ellison will do anything to ease his pain, including falling prey to her stepmother and stepsisters’ every whim and fancy.

Stumbling into a chance meeting of Prince William during a secret visit to her mother’s grave feels like a trick of fate when her stepmother refuses to allow Ellison to attend a palace festival.

But what if Ellison could see the kind and handsome prince once more? What if she could attend the festival? What if she could have everything she ever wanted and deserved by conjuring spirits to take revenge on her cruel stepmother?

As Ellison’s power grows, she loses control over the evil spirits meant to do her bidding. And as they begin to exert their own power over Ellison, she will have to decide whether it is she or her stepmother who is the true monster.

Cinderella Necromancer is a gruesome retelling, perfect for lovers of the macabre! It is both unique, and full of details from the original tale. This one is a true classic in its own, horrifying way.

“Blood spilled down the sides of his face in rivers, streaming from the wounds where the blades carved into his skull.”

Cinderella Necromancer was such a dark, gritty, gruesome tale, and I LOVED it! This one is such a unique retelling compared to others I’ve read. I loved the horrific details in the story and the terrifying plot twists. Who would have thought that such a cute fairy tale could be turned in to something of nightmares? And, this retelling is based off the fact that an ACTUAL book on Necromancy was found in Germany from the 15th century!

“And while I didn’t understand its lure, nor why my simple curiosity had grown to a lusting wonder, in that instant I felt compelled to do as the words instructed.”

The plot seemed to follow the original tale, for the most part. And yet, it was full of surprises. The twist on the character personalities and the plot were extremely entertaining and satisfied the horror lover in me. The time period was portrayed well, and the imagery used was outstanding. I really felt like I could imagine everything that happened in the book! The characters were incredibly well written, as well!

“On the morning of my sixteenth birthday, the darkness descended in a form incarnate…”

Ella was a pretty unique character. She fit the tale and time period quite well. She was a kind, caring character that undergoes a major transformation to protect the ones he loves. She started off as an innocent, naive girl and quickly became a force to be reckoned with.

“Only at that moment did it occur to me that I might be playing at something, well, otherworldly.”

William, was a superb character. He did not have a heavy influence in the story, which was a refreshing take to not have the love interest thrown in the foreground, but he still had an important plot role. He was strong, dashing, and oddly mysterious. And the plot twist involving him at the end was pretty unique!

“Like a crack of lightning in the clear night sky, there was nothing sharper in his eyes than pure, unadulterated goodness.”

Celia, Charlotte, and Victoria were oddly satisfying villains! They were horrifically cruel to Ella and very terrifying! They each had a slightly different personality to stand against each other, but they fit the protagonists perfectly! I couldn’t imagine the evil mother and stepsisters written any other way than they were here.

“As cruel as a person might be, only a monster wishes death upon their enemies.”

I believe this has become my new favorite Cinderella retelling! It had terror, gore, action, evil spirits, and magic. If you want to satisfy both the fairy tale lover and horror fan in yourself, then look no further than Cinderella Necromancer! Rating this one 5 stars!

Thank you again to Rock Star Book Tours for providing me with this free E-ARC in exchange for my honest review and allowing me to participate in the book tour! All quotes used are from the book, written by the author.

F.M. Boughan is a bibliophile, a writer, and an unabashed parrot enthusiast. She can often be found writing in local coffee shops, namely because it’s hard to concentrate with a cat lying on the keyboard and a small, colorful parrot screaming into her ear. Her work is somewhat dark, somewhat violent, somewhat hopeful, and always contains a hint of magic.

You can follow Faith on Twitter (@FaithBoughan) for plenty of flailing about food (she likes to cook!), TV shows (she watches too many), and world dance (did you know she’s been performing & instructing in Bollywood-style dance for over 8 years?).

F.M. Boughan is represented by Bill Contardi of Brandt & Hochman.

1 winner will receive a finished copy of CINDERELLA NECROMANCER & a signed bookplate, International. (Wherever The Book Depository Ships)