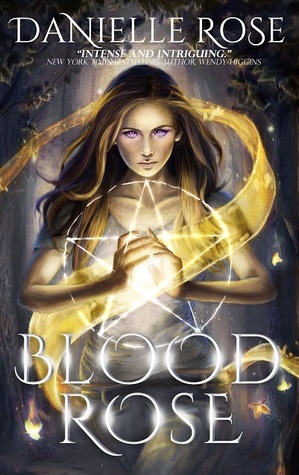 “There was an anger, a power, a ferocity to my voice– one I had never heard. I threw my head back and bellowed. My arms out beside me, I pulled at The Power nestled deep within me. The Power was strong and yielding. As it blasted from me, the house shook from roof to foundation.”

Blood Rose is fast paced, heart pumping, and intensely magical. This one has witches, vampires, romance, and danger! Rose draws you in with a rich writing style, and a powerful roller coaster ride. Prepare to be drawn in to the fight!

The Plot: Avah has grown up in a family of witches. As a witch herself, and the chosen one for The Power, she is destined to receive the ultimate weapon against the vampires. Witches and vampires have been at war for centuries. But, on the night of the ritual, the coven is attacked, and Avah is left on the brink of death. One choice can save her life, but it will cost her everything, and nothing will ever be the same again as Avah is forced to find refuge with the very creatures she sought to destroy.

I really enjoyed this one! I felt like there were characteristics of Buffy The Vampire Slayer, Underworld, The Mortal Instruments, and Twilight mixed in to the story! I liked the writing style in which we got a little bit of the backstory and character personalities mixed in with the present story. The plot was unique, fast paced, and full of surprising twists and turns! The romance was a little predictable, but I enjoyed it nonetheless. I also really loved the incorporation of pagan magic and rituals found in the book. I felt like that made the story stand out compared to what I have read lately. The fact that Avah had to recite incantations, rather than just have something magically happen, added another layer to the story and her character.

I really liked Avah’s character. I find it very unique to get the plot and character twist we saw with her. She had a mixture of personality traits from the heroines in the above mentioned titles, so I felt like that gave her depth because I liked her most of time, found her slightly annoying at times, and found her to have her fierce, kick ass moments throughout the book. She felt like a real person.

“As a spirit user, I had a small affinity for all magic because spirit was everywhere, in everthing, but I had never perfected my skill of using the other elements for long periods of time. I reached within myself, tugging the new part of me that contained my heightened senses toward the part of me that held onto my past.

My magic encompassed me, wrapping around each crevice of my body just as it had done before I had changed. I formed a small smile.”

I liked the names of the characters. especially Jasik and Malik. Though I would have liked to learn more about each of the characters and their histories, I enjoyed how they had different personalities, roles in the coven, and meshed well together in the story. I especially loved the mysterious, conflicted, bad boy traits in Jasik.

I will admit that there may be a few things a highly critical reader could pick out in this one, but I enjoyed it and definitely got lost in the magic of the story. Danielle Rose has an enticing, well developed writing style that gives the appeal and excitement of a YA novel and the maturity level of a New Adult novel. I immediately purchased the next two books, upon finishing this one, because I am dying to know what happens next!

“I heard the rumble of footsteps outside. The Rogues were coming for us. My display of power wasn’t enough to make them change their minds–a mistake they’d only make once.”