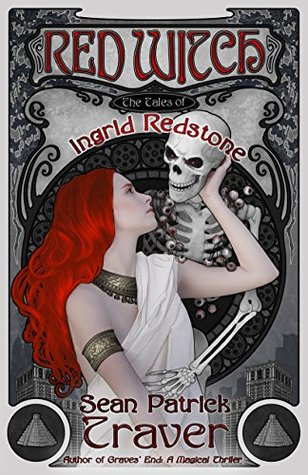 Red Witch is dark, gritty, and intense! You will find yourself lost in the intriguing tales of Ingrid Redstone. Prepare yourself for magic, action, betrayal, and death. This one is sure to impress!

The Plot: Red Witch: The Tales of Ingrid Redstone is actually split in to “episodes” entailing Ingrid’s adventures through time, after beginning a relationship with the Aztec god of death. Ingrid is a witch, and a special one at that. She is one of VERY FEW who can cross back and forth between the boundary of life and death in Mictlan, the kingdom of death. This ability allows her to travel in time, and meet those who have already crossed the threshold. But this ability to time travel may have consequences far beyond her imagination.

Oh man, did I love this one!! I’ll admit, it was a hefty read, but it was so worth it!! I loved the mix of dark fantasy and horror, and the imagery used was outstanding! To say this one was intense would be an understatement. It captured me in its grips and didn’t let me go until the very last page! Even then, I was left wanting MORE!

“…an entire shoal of tiny winged creatures buzzed by her, making her duck instinctually and flail at them for fear they’d get caught in her hair. Ingrid’s first thought was that they were iridescent green hummingbirds…It was only after he inital surprise passed that she saw the little fliers for what they were: tiny green women with opalescent skin and sugar spun hair.”

So, let’s talk about the plot. Ingrid Redstone is an actress turned witch from the year 1910. She takes it upon herself to steal a map from an elite order of witches and warlocks. This map leads to a legendary Hole in the Sky in Los Angeles. It is here she meets Mictlantecuhtil, the Aztec god of death. “Mickey”, as Ingrid calls him, is fascinated by her beauty, wittiness, and her inexplainable ability to cross beyond the threshold of life and death without the flesh falling off of her bones. Of course he would fall in love with her. So, they begin an intense relationship, and Mickey shows Ingrid how to travel in time, hoping to please her and keep her coming back to him. The book follows Ingrid’s extraordinary, and sometimes dangerous, adventures as she meets people from the past, present, and future, but always under the watchful eye of Mickey. Have you ever read a plot as unique and intriguing as this?

“In an era when mass exploration of the mysteries had become a cultural phenomenon–if not a party game or a weekend diversion–it would never be safe to leave that door unguarded again. The ancient wards around the Silent Tower had been rendered null and void to the eyes of an ever-increasing number of people…”

This book and plot were so different than anything I have ever read. Sean Patrick Traver has done an incredible job with building this world within a world, revolving around a witch, a god, and historical times and people. I was blown away at the depth of the story and the character development!

“I am in any moment or every moment or in none of them at all, according to my choosing. Nows are to me as sands on a beach or stars in a sky are in the memories of the newly dead and endless, humbled mass of points, each similar to all others and yet utterly unique.”

Ingrid was such a complex character. She didn’t feel like your typical, embellished story heroine. She felt like a real human. Even though she opened herself to a relationship with Mickey, she was still guarded with her inner most feelings. She made mistakes. She made a lot of mistakes. She had her past come back to haunt her, and she made conscious, moral decisions to try to make amends for those things. Through her adventures we got to see her many sides and layers. And, she was a pretty kick ass witch!

“She felt like a recursive figure caught up in rippling cycles of myth, running one more time from her Silent Tower, the place where all her tales began and ended.”

Mictlantecuhtil, or Mickey, was such a well written character. He was not what I would have expected as the god of death. He seemed to have human feelings and characteristics (when he allowed himself to have skin, that is). He showed jealousy over Ingrid’s past love life. He showed compassion when Ingrid needed it, and he showed vindictiveness at times. He was also quite handsome when he wasn’t in his true skeleton form.

“When she turned she saw the reason for all the shouting. Mictlantecuhtli had come to the door, a fresh skeleton under a heavy black cowl, garlanded with moist and slowly deflating human eyes. Dressed for a day at the office, that was.”

Some of the other characters we met along the way were pretty awesome too. I loved Califia’s fierceness. Dorothy Parker was so fun and snarky! And, Jimmy was an interesting conundrum and pivotal plot character.

I did not expect to love this book as much as I did! It was immersive, imaginative, and intricate. It had bits of horror, and humor, and definitely falls under the dark fantasy category. I recommend it to anyone with the time for a deep, dark adventure!

Thank you to Black Chateau Enterprises for providing me with this free review copy in exchange for my honest review.

19 thoughts on “Red Witch: The Tales of Ingrid Redstone by Sean Patrick Traver”