Hello lovelies. I hope you all are having a nice week so far! Recently, Di from Book Reviews by Di and I read Moonbeam by Adrienne Woods together. We had gotten to chatting about how we loved the first series, The Dragonian Series, and decided to read this one together. We took about a week or so to read the book, and chatted a little about our thoughts, and then came up with a series of questions to answer in place of a full review. There may be some mild spoilers here, so if you have not finished the Dragonian Series, or Moonbeam, or want to read it and haven’t started yet, be aware. 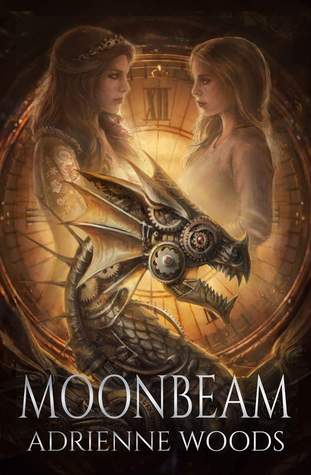 What if your ‘what if’ becomes an option. Would you change the past?

If you search my blog for the author’s name, you will be able to find all my reviews for the books in the first series.

I wanted to love this one because The Dragonian Series was such a great story! I was so excited to be back in the world of Paegeia! Sadly, I did not get the same feeling as I had with the first series. I didn’t get the world building and character development that I fell in love with in The Dragonian Series. What I got was a “what if” type of story and alternate reality. It was a little confusing and full of too much teenage drama. It had enough going for it for me to rate it with 3 stars (or faeries), and I will be reading the next book. But I wish it had left out the character changes, the teen angst, and the story discrepancies, and had just brought me back to Paegeia and Blake and Elena’s story.

1. What did you think of the original Dragonian series overall?
Me: Overall I thought it was a well written YA series with a strong lead female character, amazing friendships, and nice romances. The series was full of action and danger and had a a great plot and didn’t feel too tropey.
2. What are your  thoughts on the plot and do you think it can be read as a standalone without having read the original series?
Me: The plot seemed a little off for me and had a weird alternative reality thing going. This book definitely is not a standalone.
3. How did the writing style compare to the original books?
Me: The writing style felt a little off at the beginning compared to the original series. It started to feel more like the Dragonian Series towards the middle but then felt like it strayed a little at the end.
4. Was there anything in particular that you disliked about this book?
Me: I disliked the disconnection between the original series and this one. I also disliked the disconnected between chapter 1 and the rest of the plot.
5. If you could change one thing about the book what would it be?
Me: I would change the time line that is revisited after Elena and Blake make the necessary changes in the past. I felt that they should have been placed back in their time line with new memories.
6. Who was your favourite character in the book and can you show a quote about them or from them?
Me: Queen Catherine was my favorite because she was such a fierce mama, and friend to Elena, even though she made a lot of mistakes.
“I always treaded lightly around Queen Catherine. One did not want to upset her, especially when it came to Elena.”
7. Would you still categorize this one as ya or would you place it in adult genre?
Me: I would place this in the adult category for the sexual content and language, even though the plot still feels like a ya book.
8. Do you feel that this one had nice world building?
Me: I feel like the world building was lacking a bit in this one compared to the first series. It seemed to rely on the first series and didn’t have enough description in this book.
9. How did you feel about character development?
Me: The character development also felt like it lacked a bit for the direction the plot took. With the alternate universe approach I felt like the book was rushed and the characters relied on the development from the first series.
10. Do you think you would have enjoyed this one more if you had read it immediately after the first series?
Me: I think I would have enjoyed it more because I would have been able to still have the Dragonian mindset and would have been able to see the changes in the world from the plot in this one.
Head over to Di’s blog tomorrow to see her post and her answers to our questions!