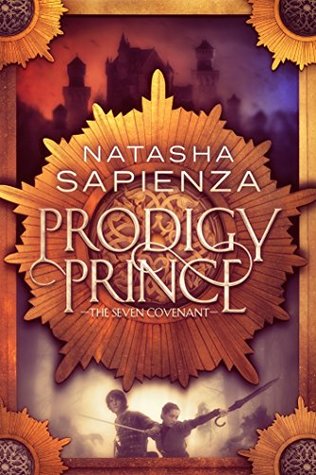 Synopsis: At seventeen, all Prince Nuelle had ever known was safety and peace while living in the Supreme Palace of Zephoris.

But one night, his older brother, Tane, defies their father by traveling to a cursed land. Now Nuelle holds the signet-ring and carries more responsibility than even Tane bore. Thrust from the palace and sent to a knight-building academy, Nuelle must discover his purpose for the entire kingdom’s sake.

From his place of banishment, Prince Antikai has been exacting revenge through fear and rebellions. Nuelle has the potential to defeat him, but he needs the help of a powerful book and six gifted youths.

Summoned by Antikai, shape-shifting beasts and other enemies hunt Nuelle and the Acumen. If either is destroyed, the faithful citizens in Zephoris will perish, and darkness will rule forever.

The Prodigy Prince is fast paced and exhilarating! It has action, adventure, a journey of self discovery, and fantastically enchanting elements. For lovers of Harry Potter, King Arthur, and Lord of the Rings, this one if for you!

I found this one incredibly dramatic and swift! The story hit the ground running from the beginning! Prince Nuelle was an incredibly well written, multi-faceted character that went on a journey of self discovery, friendship, and duty to his kingdom. He was certainly my favorite because he was so powerful and represented innocence and honor.

The plot was centered around Nuelle, and his sentinels, according to the prophecy he was meant to fulfill. With this group of well developed characters, the story also centered around the adventure they embarked on to hunt down a powerful weapon to save Zephoris from a truly evil being.

The characters that Natasha created were so fun to read! Each one had something distinctive about them. They were a mix of different cultures, backgrounds, and genders. What I loved the most was the fact that there was a sense of female empowerment with our strong, independent, brave girls! They were a true representation of the amazing world!

The world Natasha built was whimsical, exciting, and extremely colorful and unique! It was full of diverse characters, magical powers, and fantastical creatures! It had an incredible backstory, and was vividly developed! I really loved how we received the majority of the backstory as part of a history lesson at the school of knight building. It didn’t feel forced or awkward.

The story certainly had the friendship feel of Lord of the Rings. It had the feeling of duty to prince and kingdom like tales of King Arthur, and it had some Harry Potter qualities to it with regards to the group coming together in a school of sorts to help fulfill a prophecy. With saying this, the story was still original and creative! My only issues were that it felt like it moved too fast in some parts and there were a few times I felt mildly confused. But, the story has stuck in my mind since I finished reading it, and I was already wanting book 2 by time I finished it! 4-4.5 Stars!

My name is Natasha Sapienza. I’m a Cuban-American twenty-something who’s unfortunately had fifty-three boyfriends (because my first heartbreak in Kindergarten counts, too!). But, by God’s grace, I met my prince at age nineteen and got married by twenty. I’m the mother of a two-year-old boy named Arrow, and an eight-month-old boy named Braven (I really like their names, as if my sharing them wasn’t a dead give-away). I write books, I’m a YouTuber, have been very happily married to my Dream Prince for seven years as of September 10th 🙂 and I’m my hubby’s sidekick filmmaker.