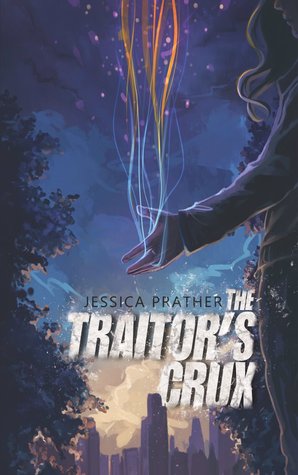 Synopsis: In a country ravaged by years of war, plague, and death, witches and wizards are blamed for the state of the world and hunted by the U.S. government. Kenadee Coria was only a young girl when her brother was taken prisoner for having magical powers.

Now sixteen years old, Kenadee discovers she too has magical powers and must face the facts: the government is watching, and they have plans for her. She’s given a deadly mission and an impossible ultimatum: the lives of a hidden group of magic refugees, or the safe return of her long-lost brother.

The Traitor’s Crux is fast paced and edgy! It is unique and exciting! For lovers of dystopian worlds AND magic, this is a must read!

The synopsis of this one really hooked me. I was promised a dystopian world, run by a corrupt government hunting witches and wizards! I was definitely not disappointed!

I loved the concept of magic being banned, forcing the witches and wizards to go in to hiding in a secret camp of refugees. It felt unique and intriguing to me. It also reminded me of a new TV show called The Gifted, which I am loving by the way.

The plot, though a little muddled at times, was exciting and enjoyable. I loved the beginning where we first learned about Kenadee’s brother, Eli, being taken away for being a magic user. This gave our main character a purpose, and I love it when our ya mc’s have an important purpose, such as finding a loved one! The intensity of the plot built from there as Kenadee was approached by President Reed and, not only told that she has magical powers, but given the ultimatum of infiltrating the refugee camp, or watching her brother die. It was a “tropey” move, but done so well. The story moved with a powerful pace and gripped me until the end.

As for our characters and their development, I felt like Harlow, one of the refugee camp leaders, was the only one that was really fleshed out, though I understood why when I made it to the end. I loved her back story and her personality. She had fight. She had a rough past, and she was intelligent, cautious, and calculating. She was the polar opposite of Kenadee.

Kenadee could have used more realization. She seemed to only be motivated by Reed’s threats, and questioned herself constantly. She didn’t have enough personality and transformation for me, but I felt like we would see more of that in the next book. She had potential, and at the end of the story I found myself wondering if painting her as a weak “ya girl” was the author’s plan all along to throw in the element of surprise in the later books.

Though there were times where I felt like the book moved a little too fast, I really enjoyed it. I loved the premise, I loved Harlow, and I loved the sneaky tricks the president had up his sleeve. I especially loved and admired the feel of the refugee magic camp and how the group took care of their own and had tried to fight the injustice of the world. With the thought provoking, cliff hanger ending, I was already craving book 2! 3.5 stars!

Thank you to Oftome Publishing for providing me with this free e-copy in exchange for my honest review!

4 thoughts on “The Traitor’s Crux by Jessica Prather”