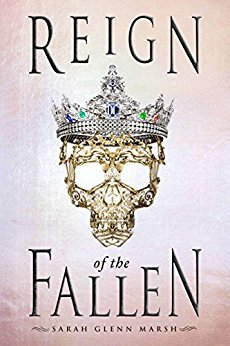 Book Title: Reign of the Fallen

Synopsis: Without the dead, she’d be no one.

Odessa is one of Karthia’s master necromancers, catering to the kingdom’s ruling Dead. Whenever a noble dies, it’s Odessa’s job to raise them by retrieving their soul from a dreamy and dangerous shadow world called the Deadlands. But there is a cost to being raised: the Dead must remain shrouded. If even a hint of flesh is exposed, a grotesque transformation begins, turning the Dead into terrifying, bloodthirsty Shades.

A dramatic uptick in Shade attacks raises suspicions and fears around the kingdom. Soon, a crushing loss of one of her closest companions leaves Odessa shattered, and reveals a disturbing conspiracy in Karthia: Someone is intentionally creating Shades by tearing shrouds from the Dead–and training them to attack. Odessa is forced to contemplate a terrifying question: What if her magic is the weapon that brings the kingdom to its knees?

Fighting alongside her fellow mages–and a powerful girl as enthralling as she is infuriating–Odessa must untangle the gruesome plot to destroy Karthia before the Shades take everything she loves.

“Our magic is love triumphing over death.”

Reign of the Fallen is dark, edgy, and suspenseful! It is full of passion, betrayal, and danger. For a book about Necromancers and death, this one is definitely full of life!

This book had such depth and imagination! I loved it! For a book that was about necromancy it offered a vast amount of beauty about life, love, and heartache. And, it was just so good!

I thought the story-line was quite unique and highly intriguing! There was a fair amount of danger, horror, betrayal, and excitement, along with some fascinating twists and turns! The idea of employing necromancers in the kingdom to bring the royalty and nobility back to life was genius. I really loved the darkness of it and the consequences of the Dead being seen without their shrouds.

The writing, and world building, was incredible. The imagery used was descriptive and captivating, and I could see the world of Karthia in my mind while I read! I was pulled in from page one and couldn’t stop reading. There was beauty, horror, and human connection within the pages. The kingdom of Karthia was highly imaginative, and the creation of the mages, and their classes, was outstanding. I loved how everything was laid out so elegantly, making me feel like I was a part of the story!

And, the characters, oh, how I loved the characters! Odessa was such a fascinating main character. She was kind, caring, and powerful, but also had a sense of vulnerability deep down. I loved her as a Master Necromancer, but also felt like she was a strong symbol of irony, as she dealt with death as part of her career, but spiraled down an emotional hole of guilt and self pity with the loss of someone dear to her.

Princess Valoria was my favorite. She was such a beautiful character. She was a great friend, and always tried to find the good in people. She represented strength and true friendship, and she was also brave and intelligent!

Meredy was also a top character for me. She was brave and strong, and had an amazing mage ability. She was witty and sassy, but also represented true friendship and beauty!

I loved the girl power represented in the book. I felt like that was an important aspect of the story, along with the strong friendships and loyalties found within the story. I also loved the diversity and LGBT representation!

I felt like the more I read, the more involved I became. As a whole, this book was dark and beautiful. All the pieces fit and added to the atmosphere of the story. It had some nice horror and paranormal aspects to it, as well touches of humor and sadness. I did not want the story to end, but I was relieved to find out there will be a sequel! 4.5 stars (or 5 faeries because Odessa may be too busy to bring one of my faeries back to life)!

“But there’s no denying our magic can be deadly.”

Thank you to First to Read for providing me with this free e-ARC in exchange  for my honest review!

16 thoughts on “Reign of the Fallen by Sarah Glenn Marsh”