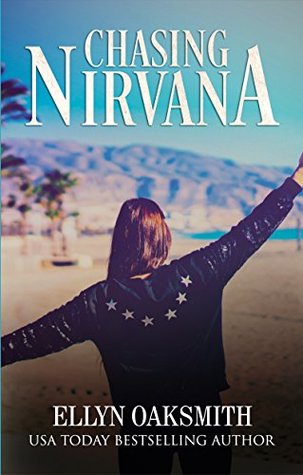 Synopsis: Everybody thinks Fran Worthy should just step down from the prom queen nomination. After all the nomination was a mean joke because Fran’s gay. In 1993 Aberdeen, Washington, faced with a room full of angry parents, Fran hears herself saying something unbelievable. Something that will change her life forever. “Tell your kids that I’m going to get Nirvana to play prom. That’s why they should vote for me. Thank you.”

Now all Fran has to do is convince her friends and her sexy mysterious girl crush to ditch school and drive 800 miles to a Nirvana concert and talk the most famous band in the world into playing a small town prom.

No problem. Unless something goes wrong.

“For a moment we’re all rock stars, singing along, chasing love and adventure and most of all, chasing Nirvana.”

Chasing Nirvana is fast paced and engaging! It is spectacularly edgy and full of wild twists and turns! For anyone who has never quite fit in, this one will touch your soul!

Oh man, did I love this one! It was gritty and emotional with a true 90’s feel! It was gripping and thought provoking, and definitely surprising!

The plot was so rich and satisfying! The idea of the road trip to a Nirvana concert in hopes of talking Kurt and getting the band to play at prom just blew my mind! I loved it, and I could totally relate to Fran’s love for the band, and their music, in such a way that it shaped who she was. The whole point of the story involving Fran, her love for Nirvana, and her self discovery as a high school aged lesbian in a closed minded town was beautiful and heartbreaking all at once.

The story just felt so real! It had diversity, low income families, and plenty of 90’s teen angst! Was I watching an episode of My So Called Life (<3)? I adored the fact that the teenagers had real world problems, and were fleshed out so incredibly well. They were quirky, dynamic, and entertaining!

Fran was the total star of the book! She was so misunderstood, and had a less than desirable home life, but was such a good person. She was beautiful, brave, and insecure all at once. I LOVED her passion for Nirvana. This really made her a unique YA character for me.

“Do normal people stand at their own front door, wondering if they should turn around, jump on a bus and move into their best friend’s basement?”

Fran’s best friend Nikki was a total bad-ass when it came to friendship. She was protective and loving toward Fran. She was confident, witty, and determined to not let anyone step on her or Fran. I admired her strength and character!

I enjoyed the comic relief of the story, Mike. He was such a humorous stoner. He had some great qualitie, but mainly brought laughter to the book.

Paul was our small town good guy. He was a little reserved for a bit, and had an extremely awful girlfriend (think Cheryl from Riverdale), but he was kind, caring, and had a really big role in the road trip.

I also really loved the new girl, Allison. I loved her punky style. I loved her intelligence and oddness, and I loved that she could see the good in Fran and was secretly adventurous and bold.

This one truly touched on what it feels like to “not fit in.” It was intense and emotional. It had humor and an entertaining story, but also touched on some important, tragic issues that are still being encountered today. I loved the way the story was told and how captivating it was.

“Song after song, time blurs in to one big joyful moment.”