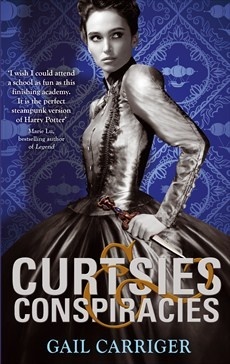 Synopsis: Sophronia’s first year at school has certainly been rousing. First, her finishing school is training her to be a spy (won’t Mumsy be surprised!). Secondly, she gets mixed up in an intrigue over a stolen device and has a cheese pie thrown at her. Now, as Sophronia sneaks around the dirigible school, eavesdropping on the teachers’ quarters and making clandestine climbs to the ship’s boiler room, she learns that there may be more to a school trip to London than at first appears …

Sophronia must rely on her training to uncover who is behind a dangerous plot and what role Mademoiselle Geraldine’s plays in the affair. Which is almost as challenging as surviving the London season with a full dance card!

Vampires, and evil contraptions, and boys, oh my! Prepare to be immersed in the wonderful world of Mademoiselle Geraldine’s Finishing Academy for Young Ladies of Quality! Curtsies & Conspiracies will take you on another grand adventure with Sophronia and her fellow classmates as they learn the fine art of being deadly ladies with class.

Have you read book 1, Etiquette and Espionage? If not, then turn back now. Deadly spoilers may await you.

Curtsies & Conspiracies was such a fun read. I loved book 1, and knew I had to jump in to book 2 soon after, so I had gone out and purchased the entire series. As a whole so far, this series has full of humor, intrigue, and ridiculously fun antics. Gail Carriger has created something vastly entertaining with the world of the Finishing School.

In book 1 we had been introduced to Bunson and Lacroix’s Boys’ Polytechnique (or the school for evil geniuses). In this book we actually got to know a few of the boys a litttle better, as they played a bigger role in the story. We also learned more about vampire hives and tethers.

Vampire hives and tethers? Yes. With this series being a paranormal series, the girls learned how to detect and infiltrate vampire hives (homes of vampire queens and their underlings and drones) and learned more about the tethers that kept the underling vampires from wandering too far from their queens.

Of course the girls still learned the necessities of becoming proper ladies, such as fainting in the correct direction, and correct behavior around boys. One was able to perform many espionage tactics while fainting properly. The ladies even learned to suspect beards of hiding covert messages.

Beards you say? Yes. One learned to suspect a man with a beard may have been a spy, or evil genius, with a hidden message tattooed upon their chin.

And, these ladies were definitely at the top of their game. They were highly dynamic, and quite hilarious. Sophronia was still leading the team with her curiosity and innate espionage skills. Dimity was ever prim and proper and a loyal friend to Sophronia. Sidheag was still as fiery as ever, and Vieve was still sneaky, curious, and intelligent. And then there was Monique.

Our resident “mean girl” Monique was harsher than ever in this one. But, I enjoyed the insight in to her character. There was a unique twist, and her role played right in to the plot of the story.

Curtsies & Conspiracies offered everything Etiquette & Espionage did. It had humor, whit, ridiculously fun antics, and vivaciously dynamic characters. It also offered plenty of gadgets and gizmos, important lessons on espionage and character assassination, and vivid descriptions of dirigibles and the wonderful world of The Finishing School.

“And I have a wonderful fake mustache I shall begin sporting in a few years’ time. That will fool most anyone. Mustaches are like that.”

All quotes are from the book, written by the author.

Aesthetic Board and Music Video:

So, apparently Little Brown Young Readers made a music video for the series a while back, and I just had to share it because it is perfection!