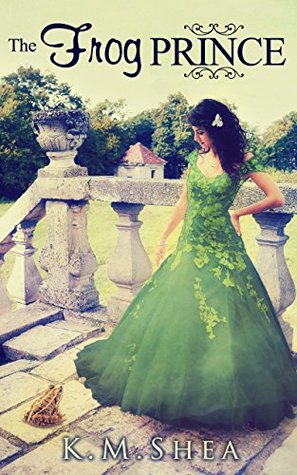 Synopsis:  Crown Prince Lucien has spent his life pretending to be a flirtatious idiot in order to manipulate his courts and hide his deficiencies. His acting backfires, however, when his father orders an enchantress to turn him into a frog for his own safety after he narrowly escapes an assassination plot.

Servant. Capable. Expendable. Strong-willed Ariane is all of these things, which makes her the perfect escort for the newly transformed Frog-Prince Lucien. Carting the lazy prince around on a velvet cushion is the last thing Ariane wants to do when it seems like the dark magic that has been plaguing her world for years is winning. But when a pair of rogue mages attack Prince Lucien, Ariane realizes the threat of darkness is much closer than she thought.

Even worse, she finds herself drawn to the prince and noticing that perhaps he is not as foolish as he acts…

Can Ariane break the spell on Lucien’s body and his heart and convince him to step into his role as the Crown Prince, or will the mages kill them both?

“The “original” Frog Prince story was recorded by the Brothers Grimm, but it was known as “the Frog Prince or Iron Henry,” and it actually has two different endings running around. I wasn’t able to track down the year the original story was released, but the modified version (the alternate ending that is now considered the “true” ending) was released in 1823 by Edgar Taylor.”

“Although the story is best known today through the Grimm Brothers’ rendition of it, parts of it may extend back until at least Roman times; a version of the story is apparently referred to in Petronius‘s Satyricon, in which the character Trimalchio remarks that, “qui fuit rana nunc est rex” (“The man who was once a frog is now a king.”). Other scholars, however, argue that this may actually be a jab at the emperor Nero, who was often mockingly compared to a frog.

At this point in the series, if you, my fellow bloggers and book lovers, don’t know how I feel about these books, then you have not been paying attention. K.M. Shea’s Timeless Fairy Tales feature retellings of old classics with new twists. They are full of love, beauty, humor, strong women, and stunning surprises that make the old tales come alive.

The Frog Prince shimmers with all the magical aspects of the series, but also feels like it has the most to offer, as far as retellings go. It blooms with rich, flowery details from the original tale, but also springs several new buds of uniqueness on us. It is full of life and everything that is K.M. Shea.

I love how much this one had me laughing. Lucien is the perfect frog prince. His antics and attitude are quite hilarious. Ariane is a perfect match to stand up to Lucien’s foolish behavior.

I remember hearing the original tale as a child, and I feel like this one really brought back the nostalgia. If you love the tale, you will adore this retelling. And, if you have not read the first 8 books in this series, you are really missing out!

I highly suggest the entire series, because this one alone is worth reading the first 8. Though they can all be read as stand-alones, this one brings a lot of the characters from the first 8 books together, and really just fills your heart with the whimsy and beauty of these enchanting faerie tales!

Thank you to the author for sending me this free e-copy in exchange for my honest review, and as part of my Faerie Tale Friday posts.

Lucien thought he would give Ariane the tongue lashing she deserved when she returned him to his room that evening. However before he could launch in to his stern lecture, she opened the door and tossed him inside. As if he were a dirty shirt!

Lucien yelped as he was thrown head over heels and landed on a folded blanket with a splat. The cushion he spent the day on hit him a moment later and bounced off.” You!” he thundered, but Ariane had already shut the door and waltzed off during Lucien’s brief time as a flying frog.