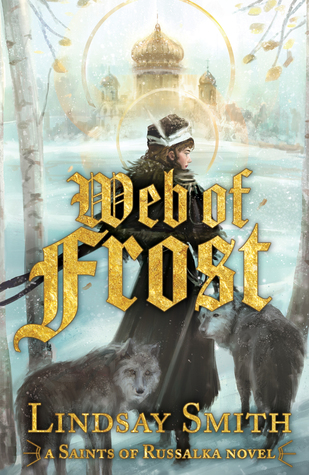 Synopsis: The saints of Russalka work their blessings in mysterious ways, allowing the royal family to perform miracles for their people. But the young princess Katza fears her powers. She’s seen grave visions of her bloodied hands destroying her family’s empire. When her older brother succumbs to illness, leaving her next in line for the throne, Katza turns to a young rebellious prophet named Ravin who promises to teach her how to control her gift. As unrest grows in Russalka and a foreign monarchy threatens, Ravin understands Katza’s fears and helps her find confidence in her gift, and her own heart. Under Ravin’s unorthodox training, Katza learns to hear the saints once more—until revolutionaries claim her father’s life.

Reeling and desperate, Katza draws upon darker and darker powers to stop the revolutionaries, the foreign invaders, and the members of her own court who would see her fail. But the more Ravin whispers in her ear, the more Katza questions whether he—and the saints—have her best interests at heart. She must choose between her love of Ravin and her love of Russalka itself—and decide whether her empire might not be better off without her.

Web of Frost will immerse you in a world of mysticism and folklore. With its elegant prose, and vivid imagery, it feels like a dream. For those who love enchanting stories full of Russian folklore and stunning twists, you will not be disappointed.

I was absolutely stunned at how much I enjoyed this one. Lindsay Smith enchanted me right from the start. I could see everything in my mind so clearly as if I was watching a movie set in a fantasy world.

Web of Frost introduced me to an incredible world cloaked in folklore and magic. I never felt lost or confused. The world was highly developed and I loved the flow of the story and the way the saints were incorporated in to the every day life of the characters.

I loved the fact that Katza was not the typical strong willed ya character. She was actually quite gullible, and weak at times. But, she fit the story and emanated grief at having suffered loss while her kingdom was on the bring of falling from a rebellion. She also had powerful moments of fierceness when using her gifts.

Ravin was dark and mysterious. It was no surprise as to the role he played in tempting Katza’s heart. He was a tempestuous influence on Katza and he added intrigue to the story.

This story felt like a Russian folk tale. It had a mildly slow pace, but was fascinating as far as its development and depth. With the amount of world building Lindsay did, I was quite surprised to learn that the saints were, in fact, fiction. The mythology and folklore entwined in the tale felt genuine and captivated my mind and my heart. This one had me so entranced that I have already decided to pre-order book two the minute it is announced!

Thank you to Barclay Publicity for providing me with this free e-copy in exchange for my honest review and as part of the blog tour!

She sank to her knees on the prayer cushion. Scanning the rows of icons, her gaze slid past Saint Marya and her bloody crown, and she searched, trying to settle on which saint to beseech. But none seemed to embody the nameless feeling inside her. Regret, but then again not. Hatred, maybe, of the world that had made such acts necessary. Of the agitators who threatened order, growing lies from seeds of truth.

Perhaps, as Ravin and his old order said, it was best sometimes to commune with Boj directly.

Is this the way to make Russalka safe, o Boj? Katza’s lips moved in time with her prayer. These shows of might. The fear that settles like frost on the streets. Is this what you want from me?

Dark whispers spun around Katza like smoke. She shivered, expecting a vision to wash over her. The hairs raised on the back of her neck and arms. But no proper vision coalesced. All she felt was a faint fluttering, like the visions were too afraid to approach her.

It felt like a warning. Like she was only just keeping her vision of bloodied hands at bay.

And then she saw the figure. Solid black, drinking up the light in the sanctuary doorway. The altar candles guttered, and briefly their light flickered over him, illuminating that elegant nose, sharp cheekbones, plush youthful lips.

Katza trembled, feeling tears threaten the corners of her eyes. His jaw tightened, as if he was nervous too, and he stepped toward her.

Katza swallowed. “I’m not certain what it is I feel.”

His tilted his head to one side.

Katza sank back onto her heels and tucked her hands into her lap. “I thought the blessings would help us spread order through the city, but instead it only seems to have brought fear. And then—then I believed I was showing strength, but perhaps it was merely cruelty.”

“Your father’s agents are rooting out the agitators,” Ravin said.

“I thought they were. But it sounds as if they’re only sweeping up children. Misguided commonfolk, desperate for change. This fear they feel—it isn’t any way to bring them around.”

Katza supposed that was true. But it did not forgive what she had done.

“You love your people,” Ravin said gently. “It’s why you strive to be more for them. Why you beseech the saints, though the priests would try to stop you. You know the blessings can be used for good.”

“And now you have learned. Haven’t you?” he asked.

Katza studied him for a moment, but her eyes were still adjusting to the dark. “I suppose so.”

“You must stay on course, tsarika.” Katza craned her neck up to look at him as he approached. “There is always a pain that comes with great change. It will chafe at you like uncut stone if you let it, but the pain will guide you onward. It will see you through the storm. And you will be all the better for it.”

Ravin paused before her. He wore simple black peasant’s boots and loose black trousers to match; his tunic was rough wool of dark gray, as was the sash at his waist. His hands clasped before him like crows at rest, ready to flutter away if startled. And that face, those dark eyes that pulled her into his void and refused to release her—

Katza swallowed and forced herself to look away.

“What are you?” she whispered. For he was no prophet—his order had cast him out. Temnost. The word lodged stubbornly in her throat. If he was forsaken, then surely she, in her desperation, was too.

Ravin let one of his hands hover over her shoulder—a question. Katza nodded and his palm pressed down. With a gasp, her heavy heart lifted. She felt cleansed. His touch was as cool as the clear mountain spring behind their summer palace in Zolotov.

“Change is painful but inevitable,” Ravin said. “Once you harness the saints’ blessings, truly master them, then you can return order to Russalka. You must endure this temporary discomfort, tsarika, for the good of your people.”

He turned his palm upward and slid his hand beneath her chin. Her lips parted. The coolness of his touch soothed her, calmed her. “Yes. Temporary.”

He smiled at her. “Once you’ve realized your power,” Ravin said, “your work can truly begin.”

Lindsay is the author of the young adult novels Sekret, Dreamstrider, and A Darkly Beating Heart, and is the showrunner and lead writer for Serial Box’s The Witch Who Came In From the Cold. Her work has appeared on Tor.com and in the anthologies A Tyranny of Petticoats, Strange Romance Vol. 3, and Toil & Trouble, and she has written for Green Ronin Publishing’s RPG properties. She lives in Washington, DC with her husband and dog.

Other Books by Lindsay Smith: