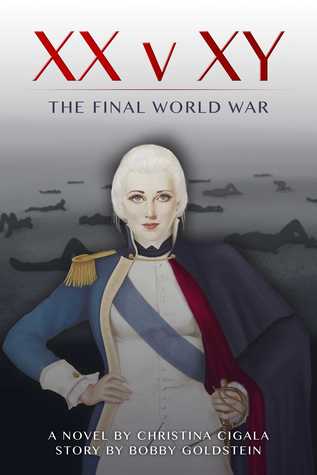 The Gender Wars won’t be fought with machines—they’ll be fought with people. And when the women of West America wage war with men in the East, it’ll be anything but unimaginative.

In East America, the most fertile women go through excruciating body- and mind-altering training until their identities satisfy that of the State. They are the “Nancys”—white hair, light eyes, and no way to differentiate themselves from their identical “sisters.” Nancy159 is fifteen. She’s auditioning to be the seventh wife of President X, the ruler of the Eastern States. If she wins, she’ll be married to the most powerful man in the world; if she loses, she’ll die.

Avis Baron is the daughter of the Luminary of West America. Recently, she stopped taking her Amplexus pill, taken by all women in W.A. to control their emotions. It turns out there’s a lot she didn’t know a person could feel—especially the way she’s feeling about her friend Ethan.

The world continues to collapse and the Gender Wars loom on the horizon…XX v. XY.

XX v XY is a powerful play on long standing, and rising, issues of society. It is fast paced, intense, and exciting. Set in a dystopian world where America is divided in to East and West, you will get a glimpse of what could be if men ruled the world and if women ruled the world.

This one drew me in with its unique premise. I was promised a world divided between men and women where power was a huge struggle. I looked forward to witnessing the age old struggle of gender equality.

What I ended up finding was a scenario of extremes. On the men’s side we had a highly misogynistic president, President X, that treated his wives, yes wives, like property. His wives, and all women striving to be like them, were called “Nancys”. They were the epitome of the Stepford Wives. They were surgically, and genetically, modified to fit one standard of appearance. They were brainwashed and taught to be obedient in all aspects of a man’s life, including the bedroom.

On the other side, we had Francesca, the luminary of the West. Though she highly disagreed with how things were run in the East, she had her own methods of control over her people. Boys and men on her side were treated almost as brutally. They were house servants and not allowed to mingle or form relationships with the women. Francesca also had a drug she forced all women to take that controlled their “weak emotions” in exchange for enhancing their strengths.

With this plot surrounding these extreme uses of power from both genders, we were given the perfect dystopian world. The author created a story meant to inspire anger. She also created a story meant to inspire change and hope for a better future in regards to how we treat each other. Though the story was extreme, bordering on ludicrous, and offensive at times, it was meant to be so to prove a point.

Cigala highlighted issues of rape, racism, prejudice, stereotypes, misogyny and extreme feminism (because true feminism is about equality, not putting down the male gender). The book was a great example of what life could be like if we were to let these social issues take over. If we were to let the hate win, we would be no better than these power hungry, inhumane characters.

With all this said, I would recommend this book for anyone looking for a powerful read surrounding social issues. The characters were not very well developed, and the ending felt rushed, but the story was intense and provoked deep thoughts on hatred and humanity. It sparked high emotions and was immensely captivating. I’d rate it 3-3.5 stars.

Thank you to black Chateau Enterprises for providing me with this free copy in exchange for my honest review.