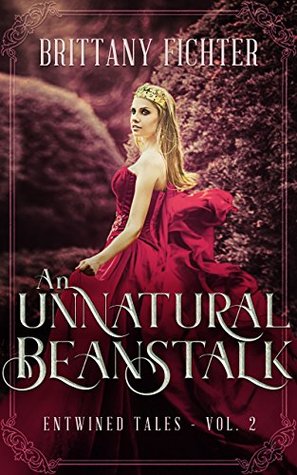 Synopsis:  Some fairies ruin everything.

Eva never doubted her place in her happy little world. Born second to a former woodcutters-turned-wealthy merchants’ family, all she ever wanted was to care for her siblings and to play the harp. Unfortunately, when her fairy godfather’s gift-giving goes awry, Eva receives an unusual talent that gets her abducted and betrothed to a loathsome duke with giant plans for the kingdom.

Jack never ventured far from his mother’s farm. But when Eva’s fairy godfather, in an attempt to fix his goddaughter’s plight, forces Jack to take some magic beans and responsibility for saving Eva, Jack finds himself in as much danger as the girl he came to save.

In this retelling of Jack and the Beanstalk, follow Jack and Eva as they attempt to outsmart the duke, save the kingdom, and just possibly find their own happily ever after as well.

An Unnatural Beanstalk is a romantic fairy tale novella. It can be read on its own but is more fun when read as a part of the Entwined Tales, a series of interconnected fairy tales by six different authors. Each story follows the adventures of one of seven children from the same family as they seek out their own happily ever afters in spite of their reluctant fairy-godfather.

There are several known versions of the original tale. The oldest is thought to be from 5000 years ago known as “ATU 328 The Boy Who Stole Ogre’s Treasure.” The most well known version is from Joseph Jacobs (1890), and is thought to have been first moralized by Benjamin Tabart in “The History of Jack and the Bean-Stalk” in 1807.

Fun Fact: In most of the earlier versions, Jack was known to rob and kill the giant without cause. In Tabart’s version, his reason was justified by finding out that the giant had killed and robbed his father.

An Unnatural Beanstalk is a whimsical adventure. It’s full of wit and charm, and a dash of danger. This is a fun retelling you don’t want to miss!

Most of us have seen or heard a version of the original tale as children. Jack came home with some magic beans that grew a gigantic bean stalk. Atop the beanstalk was a giant (or ogre depending on the version) that had an unpleasant disposition, and a hankering for human. Among his possessions were a golden goose, and a magic harp.

Brittany has taken this original tale and added a touch of whimsy, a dash of pizzazz, and a splash of charm to the mix. Along with some unpredictable, yet fitting twists, she created a retelling that reads better than the original! This has become my new favorite retelling of Jack and the Beanstalk!

The writing was elegant and captivating. It drew me in and made me feel. It was unique and at the same time reminded me of K.M. Shea’s writing style. So, for that reason, I loved it even more.

Not only was this meant to be a retelling of a classic faerie tale, but it was also meant to be a continuation of sorts of the world that these 6 authors have built. So, the tale stood out on its own with the many beautiful facets of Brittany’s writing that I now love, but it also kept the same feeling that book 1, A Goose Girl, gave me. I found that quite exciting, because it really highlighted Brittany’s talent.

I really enjoyed coming back to the world of the Entwinted Tales. Brittany painted me a vivid picture and placed brilliant images in my mind. She also created some fabulous characters for her retelling that made me want more from her as an author. I was wooed by Jack, felt sympathy for Eva, and consistently wanted to slap the Duke! Brittany also showed me another side of our grumbly Faerie Godfather!

This one was exhilerating! I loved every minute of it! It read as a standalone, but was so much better having been read after A Goose Girl. I’ve already fallen in love with this whole series and would recommend it to all faerie tale lovers!

I was on the hunt for a song played on a harp that would fit with the music I heard in my head while I read. I came across this talented harp player and enjoyed the way she played this cover, so I thought I would share it to go along with the story!