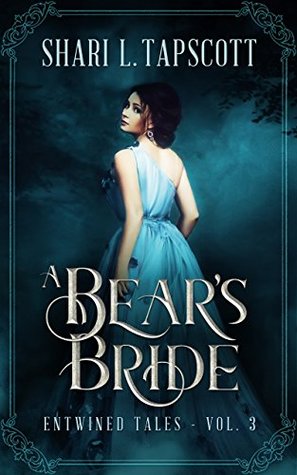 Synopsis:  Don’t judge a prince by his fur.

After her father threatens to marry her to a dull farmer, free-spirited Sophie runs away from the only home she’s ever known and sets off into the world, seeking adventure and romance. But instead of excitement, she finds a forlorn castle and the solitary prince who lives there.

For twenty years, Henri has been shrouded in mystery and speculation. He’s a legend, a nightmare, a blight upon his fair kingdom. Though Sophie knows it would be wiser to return home, she’s inexplicably drawn to the man of shadows.

A Bear’s Bride is a romantic fairy tale novella. It can be read on its own but is more fun when read as a part of the Entwined Tales, a series of interconnected fairy tales by six different authors. Each story follows the adventures of one of seven children from the same family as they seek out their own happily ever afters in spite of their reluctant fairy-godfather.

East of the Sun and West of the Moon was a tale collected by Peter Christen Asbjørnsen and Jørgen Moe and translated by George Webbe Dasent in 1910. It seems to be Norwegian in origin, and shares similarities with Beauty and the Beast.

The original tale involves a peasant agreeing to marry his daughter to the bear in exchange for riches. She accidentally breaks his curse of being a bear by day and a man by night, but the consequences of breaking the curse involve him being forced to marry his troll step-mother’s daughter. The peasant’s daughter sets off to rescue him, with the aid of a few hags and some golden trinkets. When the prince learns of her arrival, and the deceit of the troll princess pretending to aid her in exchange for her golden trinkets, he proposes a test to the princess and his step-mother. He offers his hand in marriage to the winner of the test (which he knows the trolls can’t win) and the faerie tale ends with him and the peasant’s daughter living happily ever after and freeing a bunch of humans the trolls held captive.

You can read the original translated version here.

A Bear’s Bride is astoundingly addictive! It’s emotional and heart pounding and so hard to resist! For those who love faerie tales with creative twists, this one is for you!

Oh! I loved, loved, loved this one, so much! It may have taken the place of my favorite in the series so far. It was intense and emotional and full of humor and surprise!

I loved that I had never heard of the original tale before, but that Shari made it feel so familiar and inviting. The story picked back up in the familiar world of the Entwined Tales without skipping a beat. It was whimsical and magical and full of fun humor!

Having never read the original tale, I quickly looked it up upon finishing Shari’s retelling. It honestly made me love her version even more. She made the tale more fascinating, and gave reason to some of the unexplained aspects of East of the Sun and West of the Moon. She kept a lot of the original aspects to entice those who love the tale, but also added her own spin on things to make it fresh and more entertaining.

This was my first read from Shari, and it certainly won’t be my last. I loved her elegant, captivating writing style. I loved her imaginative twists on a classic tale, and I loved the life she brought to her characters and story.

I enjoyed the sweet, faerie tale romance that grew between Henri and Sophie. I loved Sophie’s wit and fierce spirit. I found Henri alluring and chivalrous, and I enjoyed the twists thrown in to the story with the troll princess, and the faeries that Sophie encountered on her journey to save Henri from the troll queen’s grasps.

For being a novella, A Bear’s Bride really packed a punch! It was romantic, humorous, and magical. It was charming, witty, and a little edgy! If you haven’t started reading the Entwined Tales series, I don’t know what you are waiting for!

Though this one by Josephine Wall is titled Polar Princess, I think it really represents the tale beautifully!

This beauty by Margaret Walty was found when typing in the title of the tale.