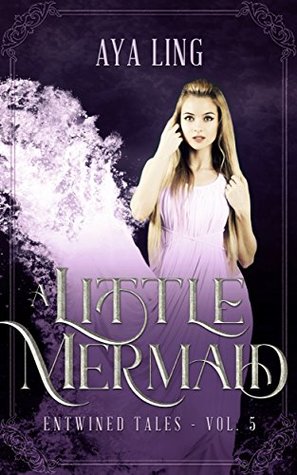 Synopsis: All Clio wants is to make her crush—a fellow merman prince—notice her. She isn’t interested in the people on land, much less a certain Prince Lukas, who was stupid enough to fall off a ship on his birthday. But when a bumbling fairy godfather misunderstands her, Clio finds herself in the worst situation imaginable—stranded on land with her tail and voice gone.

And her troubles are just beginning. Not only must Clio learn how to behave like a human, but she also needs to discover the identity of a mysterious assassin, all while guarding herself against flirtatious advances from Lukas, the very person she wants to avoid.

A Little Mermaid is a romantic fairy tale novella. It can be read on its own, but is more fun when read as a part of the Entwined Tales, a series of interconnected fairy tales by six different authors. Each story follows the adventures of one of seven children from the same family as they seek out their own happily ever afters in spite of their reluctant fairy-godfather.

The Little Mermaid was written by Hans Christian Anderson, and first published in 1837. Anderson’s tale revolved around a young mermaid who was willing to give up the life she loved in the ocean so she could gain a human soul and marry a prince. In the original tale, the Mermaid saves the prince from drowning, but is deeply saddened when he awakes believing it was another woman that saved his life. She seeks out the Sea Witch, after being told by her grandmother that mermaids cease to exist when they pass away, whereas humans have souls that live forever, and decides to make a sacrifice to live on land and seek her prince. The Sea Witch gives the Mermaid a potion to grow legs, but in return, takes her tongue, and her voice, and promises excruciating pain upon the transformation, and for every step the mermaid takes with her new legs.

Fun Fact: The prince becomes betrothed to another and the Mermaid is given a knife from the Sea Witch that would allow her to become a mermaid again if she kills him and drips his blood on her feet.

A Little Mermaid sparkles with magic and whimsy. It’s a delightful retelling of a beloved classic with a few fun twists. For lovers of mermaids, faerie tales, and light-hearted stories, this one is sure to have you floating with fancy!

This one was such a fun tail (😉), pun intended. I have always loved mermaids, and The Little Mermaid was one of my absolute favorite Disney movies as a child. Aya did such a great job with bringing this tale back to life for me as an adult, and giving me that childhood nostalgia.

She was able to capture the essence of the Entwined Tales series by bringing in familiar characters, including our beloved Grumpy Faerie Godfather. But, she also added her own spin on things and made her author voice heard. I enjoyed her cheerful writing style and the way she brought Clio to life without her being able to speak.

Clio was so adorable. She was a love stricken teenager with a carefree life. I loved how her character changed and grew as the story went on. She was a little whiny at times, but she called herself out for it, which made me admire her even more.

I thought Aya brought joy and vividness to the tale. It had humor, charm, and happiness. It captured the heart and soul of the original tale, and kept me in a cheerful mood the entire time. If you loved the original tale, or the Disney version, you will love this one! 4.5 stars!

Aesthetic Board made with Pinterest pics, and my own mermaid hair!

And, of course, a Miss Fluff original