Synopsis: Sally’s search for Earth isn’t off to a good start: chased out of her hotel room and into the broom closet of a spaceship, she’s accidentally become a stowaway on the Alliance Flagship, Traveler.

But when sabotage and murder show the crew’s true colors, Zander and Blayde are forced to stay and help them out of their mess. Lies, drama, and deceit lead them light years away to a mysterious planet on the edge of the galaxy, where the crew must band together just to stay alive. Which would be much easier if they didn’t have to deal with a diva first-mate, a droid with a religious obsession, and Blayde’s Ex whose brain is a spaceship.

Finding Earth has to be put on the back burner, as Sally’s stuck tending alien boo-boos – and she still has no idea what she’s doing. And she might live long enough to get off the planet in one piece.

“but what has this got to do with the universe? … it could happen to anyone.”

Traveler was another fiver for me! Starstruck has quickly become one of my favorite series! I have not been able to get enough of Sally, Zander, and Blayde!

Since this was book 3 in the Starstruck series, I won’t be going in to any details, to avoid spoilers. I thoroughly enjoyed it though. So, I’ll talk about how fun and exciting it was.

This one had an enjoyably fast pace, and plenty of action! I loved where the story took us this time. Anderson never ceases to amaze with her writing and story telling. I loved how vividly detailed everything was, and how she kept the feel of the first book, even though we met new characters, and traveled to a different setting.

Once again, Sally blew me away. She has a real knack for getting out of sticky situations, while keeping her wits about her. She was brave and kick ass without stepping outside of her own personality and mannerisms. She was just Sally, and I loved her.

Zander and Blayde changed a little for me, but in good ways. They kept their mystery. Blayde kept her snark, and Zander kept his aloofness. But, they also both became a little more personable, and both grew on me (if this was even possible).

Through all the adventure and danger, Anderson was able to capture raw emotion and weave it in to the blanket of space and time. She brought up past issues that Sally hadn’t quite worked through completely. She brought up new issues for the trio to tackle, found a way to bring up a discussion about fate and faith, and she introduced and developed some dynamic characters, like Ter and Kork, that won’t be forgotten. She did all of this while keeping the humor, pop culture references, and excitement in the series. My only negative was realizing I now have to wait for book 4!

I had the opportunity to read this e-ARC for free, in exchange for my honest review, after connecting with the author through The Book Robin Hoods site. If you are an author looking for more reviews, or a reviewer looking to help out Indie/Self Published and Lesser Known Authors, make sure to click the link below and join us!

Quotes are from the book, written by the author. I shortened them for my review. 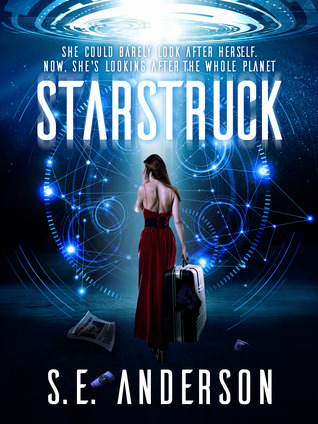 Synopsis: After an incident with a hot-air balloon causes college-dropout Sally Webber to lose her job, she sets off to find direction in her life. Crashing into a teleporting alien, however, is not on her to-do list.

Now she’s on the run from TV-drama-loving aliens, and things are just getting started. Zander won’t stop reeling her into life-or-death situations to save her planet, as he waits for his laser-wielding sister to search the universe for him. Though Sally isn’t quite sure if he wants to save Earth from annihilation, or just quell his curiosity of all things human.

On top of this, she’s got to find lost alien emissaries, as well as a job, and stop the planet from getting incinerated in the process. But with Zander as her roommate, what could possibly go wrong?

S.E. Anderson can’t ever tell you where she’s from. Not because she doesn’t want to, but because it inevitably leads to a confusing conversation where she goes over where she was born (England) where she grew up (France) and where her family is from (USA) and it tends to make things very complicated.

She’s lived pretty much her entire life in the South of France, except for a brief stint where she moved to Washington DC, or the eighty years she spent as a queen of Narnia before coming back home five minutes after she had left. Currently, she goes to university in Marseille, where she’s starting her masters of Astrophysics.

When she’s not writing, or trying to science, she’s either reading, designing, crafting, or attempting to speak with various woodland creatures in an attempt to get them to do household chores for her.  She could also be gaming, or pretending she’s not watching anything on Netflix.