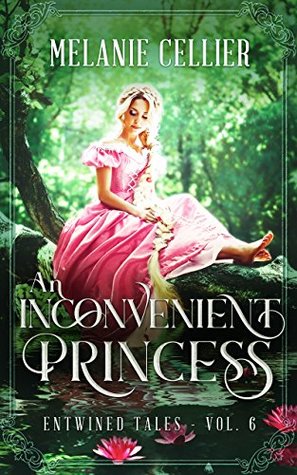 Synopsis: Penny knows all about expectation. After all, she’s a seventh child and they’re always blessed, especially in a fairy-favored family like Penny’s. But Penny also knows all about disappointment. Because there’s nothing magical about her at all. She’s perfectly ordinary, even outshone by her own twin, Anneliese.

But maybe being ordinary is a good thing in this case, since gifts from the family’s fairy godfather, Mortimer, tend to lead to disaster. Which is why Penny is filled with dread when she discovers her twin has called on Mortimer for help. Anneliese ran away to find adventure, but now it sounds like she needs rescuing—if only Penny knew where to find her.

But soon Penny has far more problems than the location of her missing sister. When she’s forced to call on Mortimer herself, she’s soon embroiled with a rogue fairy, a tower without doors, a charming prince, and one highly inconvenient princess. With more and more people looking to Penny to secure their happily ever afters, will Penny ever have a chance to find one for herself? Find out in this twist on the classic fairy tale, Rapunzel.

An Inconvenient Princess is a romantic fairy tale novella. It can be read on its own, but is more fun when read as a part of the Entwined Tales, a series of interconnected fairy tales by six different authors. Each story follows the adventures of one of seven children from the same family as they seek out their own happily ever afters in spite of their reluctant fairy-godfather.

Rapunzel is a tale that has many versions. The earliest version may have come from the 11th century Rudaba by Ferdowsi where Rudaba offers to let down her hair for her lover, Zai, to climb up in her tower. Giambattista Basile published a tale titled Petrosinella in 1634. This is where the phrase “Rapunzel, Rapunzel, let down your hair,” originated. Basile’s tale influenced Persinette by Charlotte-Rose de Caumont de La Force, which was published in 1698.  This version influenced Friedrich Schulz to publish Rapunzel in 1790, which was then adapted in 1812 by the Brothers Grimm.

You can read the Brothers Grimm version here.

An Inconvenient Princess is adventurous and entertaining! It is full of fun, whimsy, and surprising twists! For those who enjoy retellings with unique spins, this one if for you!

As the last book in the Entwined Tales series, this one was bittersweet. It was brilliantly written, and oh so fun, but it was definitely sad to read the end of these exciting tales. An Inconvenient Princess was a whimsical twist on the original tale of Rapunzel, and a happy ending to the story of our siblings, and our beloved grumpy faerie godfather.

Melanie was able to capture the essence and magic of the original Rapunzel while adding her own personality to the tale. I really enjoyed both the original bits, and the new twists. The story definitely matched its title too.

I really loved that this tale wasn’t just about Rapunzel, but about those she affected around her. Rapunzel was sweet, innocent, and naive, and definitely needed rescuing, but she was so adorable. I loved the interaction between her and Penny, and how Penny ended up being the main reason that both Rapunzel, and Penny’s sister Liesa, were rescued, and I loved how the charming prince fit in to the story.

Melanie’s writing was very elegant and captivating. The story really came to life for me and I loved every minute of it. This tale fit so well with the other five, and as far as the series goes, I never really felt any disconnect between any of the books. I could see differences in the authors and their writing styles, of course, but each book easily led in to the next and kept the magic flowing.

An Inconvenient Princess was a beautiful twist on a classic tale. It was vivid and imaginative, and very enjoyable. If you have not started The Entwined Tales series, and you love faerie tale retellings, I highly suggest buying the entire series right now!

Thank you to the author for sending me this free e-copy in exchange for my honest review and as part of my Faerie Tale Friday post.

So, I know the story of Rapunzel and the story I am about to share are pretty different, and have vastly different origins, but, every time I read this poem and see art inspired by it, I think of Rapunzel and how she was trapped in her tower. There are enough similarities for me that I could almost image that Lord Tennyson was inspired by the original Rapunzel tale. Both tales have a cursed maiden, trapped in a tower. Both maidens long to be free to escape their curses and explore the word, and both maidens end up seeing handsome men from beyond their prisons that they long to meet for their happily ever afters.

The Lady of Shalott (1832)
by Alfred Lord Tennyson

On either side the river lie
Long fields of barley and of rye,
That clothe the wold and meet the sky;
And thro’ the field the road runs by
To many-tower’d Camelot;
And up and down the people go,
Gazing where the lilies blow
Round an island there below,
The island of Shalott.

Willows whiten, aspens quiver,
Little breezes dusk and shiver
Thro’ the wave that runs for ever
By the island in the river
Flowing down to Camelot.
Four grey walls, and four grey towers,
Overlook a space of flowers,
And the silent isle imbowers
The Lady of Shalott.

By the margin, willow veil’d
Slide the heavy barges trail’d
By slow horses; and unhail’d
The shallop flitteth silken-sail’d
Skimming down to Camelot:
But who hath seen her wave her hand?
Or at the casement seen her stand?
Or is she known in all the land,
The Lady of Shalott?

Only reapers, reaping early
In among the bearded barley,
Hear a song that echoes cheerly
From the river winding clearly,
Down to tower’d Camelot:
And by the moon the reaper weary,
Piling sheaves in uplands airy,
Listening, whispers “‘Tis the fairy
Lady of Shalott.”

There she weaves by night and day
A magic web with colours gay.
She has heard a whisper say,
A curse is on her if she stay
To look down to Camelot.
She knows not what the curse may be,
And so she weaveth steadily,
And little other care hath she,
The Lady of Shalott.

And moving thro’ a mirror clear
That hangs before her all the year,
Shadows of the world appear.
There she sees the highway near
Winding down to Camelot:
There the river eddy whirls,
And there the surly village-churls,
And the red cloaks of market girls,
Pass onward from Shalott.

Sometimes a troop of damsels glad,
An abbot on an ambling pad,
Sometimes a curly shepherd-lad,
Or long-hair’d page in crimson clad,
Goes by to tower’d Camelot;
And sometimes thro’ the mirror blue
The knights come riding two and two:
She hath no loyal knight and true,
The Lady of Shalott.

But in her web she still delights
To weave the mirror’s magic sights,
For often thro’ the silent nights
A funeral, with plumes and lights,
And music, went to Camelot:
Or when the moon was overhead,
Came two young lovers lately wed;
“I am half sick of shadows,” said
The Lady of Shalott.

A bow-shot from her bower-eaves,
He rode between the barley-sheaves,
The sun came dazzling thro’ the leaves,
And flamed upon the brazen greaves
Of bold Sir Lancelot.
A red-cross knight for ever kneel’d
To a lady in his shield,
That sparkled on the yellow field,
Beside remote Shalott.

The gemmy bridle glitter’d free,
Like to some branch of stars we see
Hung in the golden Galaxy.
The bridle bells rang merrily
As he rode down to Camelot:
And from his blazon’d baldric slung
A mighty silver bugle hung,
And as he rode his armour rung,
Beside remote Shalott.

All in the blue unclouded weather
Thick-jewell’d shone the saddle-leather,
The helmet and the helmet-feather
Burn’d like one burning flame together,
As he rode down to Camelot.
As often thro’ the purple night,
Below the starry clusters bright,
Some bearded meteor, trailing light,
Moves over still Shalott.

His broad clear brow in sunlight glow’d;
On burnish’d hooves his war-horse trode;
From underneath his helmet flow’d
His coal-black curls as on he rode,
As he rode down to Camelot.
From the bank and from the river
He flash’d into the crystal mirror,
“Tirra lirra,” by the river
Sang Sir Lancelot.

She left the web, she left the loom,
She made three paces thro’ the room,
She saw the water-lily bloom,
She saw the helmet and the plume,
She look’d down to Camelot.
Out flew the web and floated wide;
The mirror crack’d from side to side;
“The curse is come upon me,” cried
The Lady of Shalott.

In the stormy east-wind straining,
The pale yellow woods were waning,
The broad stream in his banks complaining,
Heavily the low sky raining
Over tower’d Camelot;
Down she came and found a boat
Beneath a willow left afloat,
And round about the prow she wrote
The Lady of Shalott.

And down the river’s dim expanse –
Like some bold seer in a trance,
Seeing all his own mischance –
With a glassy countenance
Did she look to Camelot.
And at the closing of the day
She loosed the chain, and down she lay;
The broad stream bore her far away,
The Lady of Shalott.

Lying, robed in snowy white
That loosely flew to left and right –
The leaves upon her falling light –
Thro’ the noises of the night
She floated down to Camelot:
And as the boat-head wound along
The willowy hills and fields among,
They heard her singing her last song.
The Lady of Shalott.

Heard a carol, mournful, holy,
Chanted loudly, chanted lowly,
Till her blood was frozen slowly,
And her eyes were darken’d wholly,
Turn’d to tower’d Camelot.
For ere she reach’d upon the tide
The first house by the water-side,
Singing in her song she died
The Lady of Shalott.

Under tower and balcony,
By garden-wall and gallery,
A gleaming shape she floated by,
Dead-pale between the houses high,
Silent into Camelot.
Out upon the wharfs they came,
Knight and burgher, lord and dame.
And round the prow they read her name,
The Lady of Shalott.

Who is this? and what is here?
And in the lighted palace near
Died the sound of royal cheer;
And they cross’d themselves for fear,
All the knights at Camelot:
But Lancelot mused a little space;
He said, “She has a lovely face;
God in his mercy lend her grace.
The Lady of Shalott.”

The Lady of Shalott by John William Waterhouse

The content and origin of this poem will be bringing us in to our discussion next week of Myths vs. Faerie Tales.

#Confidence is something that has always been hard for me to feel and express. I have been working harder than ever on building my confidence, and loving myself. Being a healthier version of myself has helped. So has finding other people to interact with that share things like #alopecia and #type1diabetes, and people that have gone through, and are going through, their own #WeightLossJourney.
💛 Be the light you wish to see in the world. 🧡
Guys! I #read another book! 😱🙊