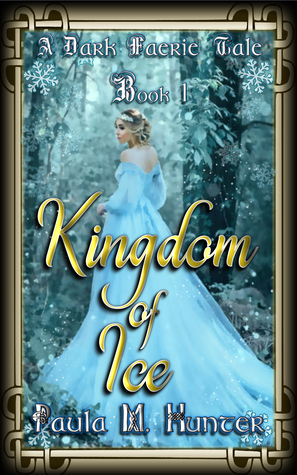 Synopsis: The peaceful Kingdom of Turia awaits the birth of their king and queen’s first child, but a cruel twist of fate and a demon’s intervention destroys their lives forever. Years later, events orchestrated by Queen Eleanor, Princess Khione’s heartless and jealous mother, takes away her freedom and almost her life. She is forced to flee into a nearby forest inhabited by fae.

Banished from Turia, Agnes and Gerda try to start a new life in the Kingdom of Agraunia. There Gerda befriends her neighbour’s son Kai. Their close friendship eventually blossoms into love. Shortly after Kai becomes cold and distant, he disappears. Rumours persist that he is dead. Only Gerda believes he is still alive and in danger. She sets out alone to rescue him blissfully unaware of the danger before her.

Kingdom of Ice, book 1 of A Dark Faerie Tale, is a blended retelling of Snow White, the Snow Queen and other fairy tales, with action/adventure and a magical touch of romance.

The Snow Queen was written by Hans Christian Anderson and first published on December 21, 1844. It is a story centered around the struggle between good and evil, and was originally told in 7 parts. It has a heavy religious influence, as the troll who creates the mirror that distorts the world it reflects is said to be the devil aiming to make fools of the angels and god.

Snow White, or Schneewittchen, was published by the Brothers Grimm in 1812. The dwarves were not given names until the story was made in to a Broadway play in 1912. The dwarves were given different names in the Disney version. The original story involved the evil queen attempting to kill Snow White multiple times, and ending up being sentenced to dance herself to death in “red hot shoes” per order of the prince at Snow White’s wedding.

Kingdom of Ice is vibrant and rich. Elegantly poised, with a touch of spunk, romance, and action, this one is like a breath of fresh air. For lovers of meshed faerie tale retellings, you will adore this tale.

I absolutely loved Paula’s writing style. It was very elegant and vivid. I felt like I was walking in a dream world where everything was rich and vibrant. This one definitely had a gorgeous, faerie tale feel to it.

The majority of the story was heavy with a twisted version of Snow White. I enjoyed the unique spin Paula added to the tale. The story also had bits of The Snow Queen, a nod to The Wild Swans, and, there were goblins, elves, trolls, and faeries galore!

Kingdom of Ice was magical and whimsical. It was a quick, enjoyable read that kept me glued to my chair from beginning to end. It was more on the predictable side, but still had a few surprises in store. As a retelling, this one definitely hit the mark with both originality and nostalgia, but it also was able to stand on its own as a new type of faerie tale.

I loved the dynamic characters in the tale as well. Khione was strong and determined, and really fit the Snow White part. Gerda was brave and loyal and never gave up. And I loved the elves and their hospitality and brotherly ways. What I truly loved though was the girl power and friendship shared between Gerda, Khione, and Avira.

This one was short, sweet, and direct. It was an easy read, but definitely had an enjoyable level of complexity and development. I had only gotten about halfway through it before I decided that I wanted to finish the trilogy. It was enchanting and delightful, with a swirl of darkness, and I can’t wait to read the next one!

Mini Faerie Tale Q & A With the Author:

Me: Which faerie tales are your favorite?

Paula: This is difficult one for me, because I do love so many. One of my favourites is Cinderella. I have fond memories from childhood, reading and re-reading my Ladybird Books version of Cinderella and falling in love with the beautiful illustrations by Eric Winter. Others are: Sleeping Beauty, Snow White, Snow White and Rose Red, The Little Mermaid and the Steadfast Tin Soldier.

Me: Which faerie tales inspired you to write the Kingdom of Ice (Dark Faerie Tale) trilogy?

Paula: At first I wanted to write a series of retellings focusing on a different story in each of the books, however, I didn’t want to write a standard retelling, as there are so many out there. I wanted something different and so I came up with the idea of combining the stories, a sort of mashup. The first story that came to mind was Snow White, followed by the Snow Queen, both wintery names. I still thought that the first book would be a standalone in a series, but something very different happened as I started to write. I realized the story could not be told in one book; therefore I needed to bring in more characters drawn from faerie tales.

Kingdom of Ice is based on Snow White and the Snow Queen. Queen of Thorns: Rapunzel, the Wild Swans (there is a small reference to this in Kingdom of Ice) and Sleeping Beauty. Finally, Reign of Fire has additional characters inspired by Little Red Riding Hood and Jack and the Beanstalk.

Me: What kind of experience did you have in doing research while writing in some of the retelling scenes in Kingdom of Ice.?

Paula: I find research interesting and found myself engrossed in a labyrinth of information. As a lover of all things historical, I started with castles, life in the Middle Ages and Tudor period, and Tudor period clothing and customs. The most unusual bit of research was that of the effects of eating magic mushrooms! Needless to say, I didn’t eat any as part of that research.

Me: Which faerie tales are your least favorite?

Paula: The original faerie tales the Brothers Grimm and Charles Perrault based their stories, were very macabre and gruesome. Certainly not something you would read at night to children, as they don’t make for a pleasant read. My least favourite tales are the very grim or lesser known tales: The Juniper Tree, Bluebeard, Hansel and Gretel and Sun, Moon and Talia, which is a earlier version of Sleeping Beauty.