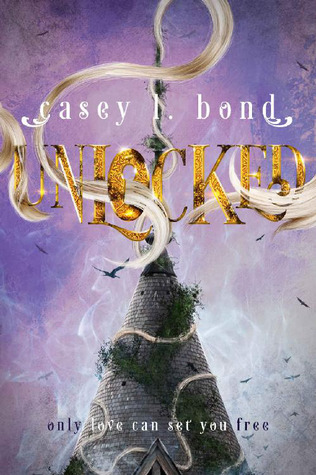 Synopsis: Princess Raya of Paruth lived alone on a deserted island in a towering lighthouse, forgotten by time. With only a loyal albatross as a friend, she had little hope or joy in her life until he washed up on her shore in the middle of a raging winter storm.

Prince Trevor of Galder left his father and kingdom behind to travel north in search of a wife. It was time to settle down and forget Ella Carina, the woman who chose to love a peasant and follow her heart instead of choosing Trevor and fulfilling her duty to her people. He didn’t heed the warnings about the North Sea in winter, and his ship, crew, and captain paid the price.

Raya and Trevor must work together to find a way off the island, or risk being trapped there for the rest of their lives. But sometimes the simplest lessons are the hardest, and each will have to learn that the only thing that can truly set you free is love.

Rapunzel was published by the Brothers Grimm in 1812. Their version was based off the 1790 tale written by Friedrich Schulz, which was based off of Persinette by Charlotte-Rose de Caumont de La Force, influenced by Petrosinella by Giambattista Basile.

The original tales seem to have a common plot involving Rapunzel’s mother, while pregnant with her, craving something so from a neighboring garden so much that it prompts her husband to steal it. He is caught by the owner of the garden, Dame Gothel (sometimes and enchantress), and a deal is struck. He is allowed to continue to steal the plant in exchange for giving Rapunzel to her when she is born. Dame Gothel locks Rapunzel in the tower at age 12 when she sees how incredibly beautiful she has become.

This tale almost ends without a happily ever after though. The Dame ends up tricking the prince when she finds out of their late night trysts in the tower and it leads to him becoming blind, and Rapunzel heading off on her own, with her hair cut off, to have her twin babies alone. The prince eventually finds her years later and his sight is restored by her magic tears.

“Despite all he’d been through, he was determined not to let go of hope, even if he was a little bit broken like me. Even if he was sad at times. Even if his heart had been split in two and hadn’t fully healed. Maybe the cracks that made him who he was met the ones that streaked across my surface, and we recognized one another as kindred imperfections. We were flawed people who used to be whole, but were made stronger by things deep within that knitted our broken pieces together.”

Unlocked was beautiful and sensational! Oh, my heart! It started off mildly slow, but the story, and characters, greatly made up for that. It was humorous and touching and captivating! It had a touch of darkness to it, and was definitely full of whimsy, romance, friendship, and enchantment.

I adored the story and the twist on the original tale. The reason behind Raya being trapped in the lighthouse on the island was intriguing and really drew me in to the whole story. Trevor becoming trapped on the island due to the storm and ship wreck, instead of just waltzing by and hearing her singing, was refreshing and more meaningful.

Raya was so adorable, and full of spunk. I loved her sense of independence and her stubbornness. She certainly stepped outside of the box of the typical faerie tale princess, and I adored her morality, kindness, and the way she lit up the lives of those around her.

Trevor was such a refreshing take on the typical prince charming. He was still brave and dashing and chivalrous, but he also had faults, and self doubt and needed a little saving himself. He stole my heart and shined bright throughout the tale.

Tross (yes the bird) was my favorite though. He was almost like the comic relief of the story. He was sweet and loved kisses, and was a great judge of character! But, there was also Gill and Cap. I loved those ship crew members so freaking much! They were great supporting characters that lit up the story, brought a little humor, and became great friends to Raya and Tross.

I just couldn’t get enough of this! I was in tears at the end. Happy tears, that is. The story was so touching. I loved the deep friendship that was built between Raya and Trevor. I loved the ending. I loved the way Raya’s bold, beautiful personality changed people around her and opened hearts, and I loved the bits of the original tale that the author mixed in with her imagination and beautiful world building.

Thank you to Lady Amber’s Reviews and PR and the author for providing me with this free e-ARC in exchange for my honest review, and as part of the blog tour!

Both small quoted passages are written by the author found in the e-ARC. They are subject to change in the published version.

I found this Josephine Wall piece that I felt really fit the story and Raya.

Award-winning author Casey L. Bond resides in Milton, West Virginia with her husband and their two beautiful daughters. When she’s not busy being a domestic goddess and chasing her baby girls, she loves to write young adult and new adult fiction.