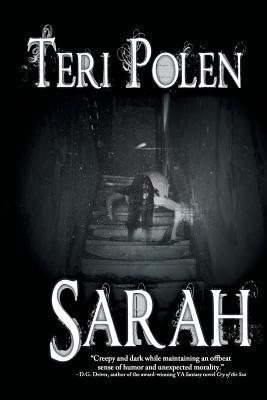 Synopsis: Seventeen-year-old horror fan Cain Shannon thought helping a ghost find her killers would be the supernatural adventure of a lifetime. Now, he just hopes to survive long enough to protect his family and friends from her.

A bet between friends goes horribly wrong, resulting in Sarah’s death. When she returns to seek justice against those responsible, Cain agrees to help her. But when he discovers Sarah has been hijacking his body, he realizes she wants retribution instead of justice.

Terrified of what could have happened when he wasn’t in control, Cain commands Sarah to leave his house – but exorcising her isn’t that easy. She retaliates against her murderers in bloody, horrific ways, each death making her stronger, then sets her sights on Cain. With the help of friends, Cain fights to save himself and his loved ones and searches for a way to stop Sarah before she kills again.

Sarah was a refreshing take on YA and ghost stories. With an emotional story line, and strong characters, it was gripping from the beginning! It was creepy and hard hitting, and definitely stuck with me.

I knew the moment I saw the cover, and read the synopsis, that I had to check out Sarah! I was not disappointed. It had a nice mix of creepiness to go along with the strong plot line, and very well-developed characters.

It was refreshing to read a young adult book from the perspective of a teenager boy that cared so much about his family and friends. Cain was definitely not the typical hormone driven male. He had a lot of character and added depth to the story.

I loved getting the story line about Sarah and her death. It almost made her quest for vengeance feel a touch justified for what she went through. It was definitely interesting, and a bit creepy, to get the haunting and possession bits, and I thought it was unique to get the interaction between her and Cain.

I also really loved getting to know Cain’s cat, Eby, and his little sister, Maddie. Both of those characters added a little extra to the story. Maddie added a layer of innocence and curiosity, and Eby added a layer of realism with his behaviors and mannerisms, and reactions to Sarah (plus I adore cats).

Overall, it was a satisfying read. Though it could have used a little more horror, and a little polishing, it was engaging and creepy, and kept me entertained. There was a little predictability to it, but the shocking moments made up for that. And, that ending! Whew! 3.5 stars (or 4 mermaids).

6 thoughts on “Sarah by Teri Polen” What is your happy place?
Mondays are great for starting over, or getting back to something you have previously started. This is my Monday to pick myself back up and get back to being a badass! I've had a few weeks off since my bicycle accident. I've had time to rest, wallow in self pity, and reflect, and now I'm ready to jump in again!
#Confidence is something that has always been hard for me to feel and express. I have been working harder than ever on building my confidence, and loving myself. Being a healthier version of myself has helped. So has finding other people to interact with that share things like #alopecia and #type1diabetes, and people that have gone through, and are going through, their own #WeightLossJourney.