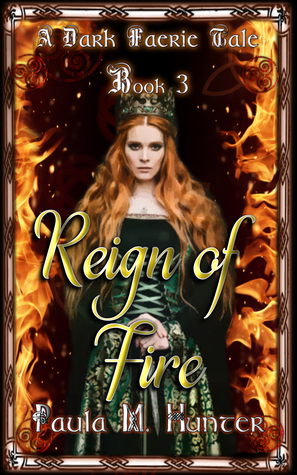 Synopsis: After a revealing chain of events, Rose, the true heir to the throne of Turia, returns with her faerie godmothers. Upon arriving at her former summer residence, she finds some unexpected houseguests: A girl in a red cloak and a wolf. Along with Khione and her friends, they volunteer to help her depose Queen Eleanor, a task that may prove more than difficult.

As her nuptials to the King Wilbur draw near, Eleanor’s association with Silvia proves to be potentially dangerous. Strong willed Princess Eliza finds her new stepmother intolerable, but is horrified to discover the extent of her father’s cruelty. Wilbur’s machinations are dealt a severe blow, which threatens to re-ignite hostilities between humans and fae.

Will this faerie tale have a happily ever after?

Little Red Riding Hood can be traced back as early as the 10th century.  There is a known Italian version titled The False Grandmother, as well as the best known versions from Charles Perrault and the Brothers Grimm. With the story revolving around a dangerous wolf that wants to eat Little Red, it was thought that the moral of tale was to warn of the dangers of the forest, wandering off alone, and not listening to your mother.

You can read several versions of the tale here.

There are several early known versions of Jack and the Beanstalk. The oldest is thought to be from about 5000 years ago known as The Boy Who Stole Ogre’s Treasure. The most well known version is from Joseph Jacobs (1890), and another version is known as The Story of Jack Spriggins and the Enchanted Bean from 1734. Most versions involve the trading of the family cow for magic beans that grow a beanstalk that leads to an ogre, or giant’s, castle in the sky. Jack proceeds to steal several items from the monster, including a magic harp, resulting in him becoming angry and coming after Jack. This has created controversy in the past, suggesting that Jack was not the hero he was portrayed as. Benjamin Tabart wrote a version, moralizing the reason for Jack’s theft, thus making him a true hero seeking vengeance against the giant.

Reign of Fire was everything I hoped it would be, and so much more! It was beautiful and magical, and a faerie tale all it’s own. I absolutely adored it and all it’s whimsy!

What attracted me to this trilogy to start with was the fact that Paula offered a darker version of a faerie tale mashup. She definitely delivered! But, besides the “Gothic/Dark Faerie Tale” aspect of the trilogy, Paula wove together several tales, including her own, in such a fantastical way that, if you had not been familiar with the originals, you would have thought it was all her own.

I loved the first two books, but this one took my heart. It absolutely spoke to the faerie tale lover in me, and made me feel like I was in a dream of fantasy and lore. It was vivid and unique, and really came to life. Not only did Paula include details from the first two books, and nods to the original tales (Snow White, The Snow Queen, Rapunzel, and Sleeping Beauty) she had already woven through her story, but she also added in new bits from Little Red Riding Hood and Jack and the Beanstalk. She based characters and plot twists off these tales, but she added her own spin to them, and wove them together in a vivacious way!

This book had a specific feel to it, and it was exhilarating! There was danger, passion, forgiveness, and loss. It had witches, elves, faeries, and demons. It was magical and compelling, and I could not put it down! It was such a bittersweet ending to the tale that Paula created because it was my favorite, but I knew it was the end. I loved everything about it. The dynamic characters. The exciting story-line. And the spellbinding magic it harnessed.

So, I got a little carried away on Pinterest, but I put together a few aesthetic boards that represent the beauty and magic of the book, and the trilogy. I hope you enjoy them!