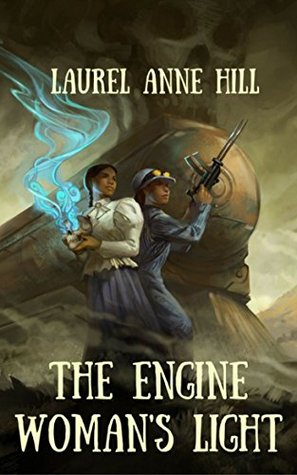 Synopsis: A mystical vision of an airship appears to fifteen-year-old Juanita. The long-dead captain commands her to prevent California’s thrown-away people—including young children—from boarding trains to an asylum. That institution’s director plots murder to reduce the inmate population. Yet to save innocent lives Juanita must take lives of the corrupt. How can she reconcile her assignment with her belief in the sacredness of all human life? And will she survive to marry her betrothed?

Juanita sets out despite inner trepidation to sabotage the railroad. Her ancestor Billy, the ghost of a steam locomotive engineer, guides her. Then bit by bit, she discovers the gut-wrenching truths all her ancestors neglected to reveal.

Come visit Juanita’s world—an alternate nineteenth-century California—where spirits meet steampunk, where both love and anger emanate from beyond the grave.

This one hit right down the middle for me. Possibly even closer to the lower end. I was promised a coming of age, mystical, steampunk story full of spirits and danger. Though I did get most of those, I didn’t quite get the steampunk aspects (besides the air ship that appeared and was mentioned only a handful of times), and I also got more sexual content and rape than I had expected.

For the most part, the story was dark and powerful. It followed strong, brave Juanita as she fought to fulfill the wishes of her ancestors to stop a terrible travesty that had been happening to undeserving people for years. Trains of people, sick, old, mentally impaired, and unwanted orphans, had been sent to the asylum where poor treatment and murder occurred. Juanita had even once been an unwanted, orphan baby on one of those trains when she was saved by her great grand-mother, destined to become a mystic traveler.

Juanita had the ability to see and communicate with her dead ancestors. She had the ability to travel to the Shadow World, and to even separate her spirit from her body. It was because of these abilities that she received visions of what she needed to do to save the innocent people aboard the trains.

The story was unique and very powerful. I don’t know that I have read anything like it before. It combined mysticism and Mexican culture with the wild west in an alternate reality. I loved the family dynamic and the importance of following your ancestors and respecting them. The problems for me with the story were the unnecessary instances of sexual content, rape, abuse, and misogynistic oppression. There was even a situation after a character had been raped where she was told that she was at least lucky her face hadn’t been beaten in, like that was supposed to be worse than being violated.

I honestly made it to the last 50 pages and kind of skimmed to the end. Though, the ending was kind of sweet, and intriguing, and even a little satisfying. And, though it sounds like I didn’t enjoy the story at all, I did a little bit, I just wish it didn’t have the gratuitous sex and rape, and a somewhat disturbing, abusive relationship. The characters were highly dynamic and very well developed. The world building was quite interesting and very descriptive, and the idea behind the spirits guiding Juanita was what kept me going throughout the story. I’d only recommend it to those over 18 looking for a powerful paranormal journey if you could get past the darkness, the sexual content, and the rape scenes. I’d rate it 2.5 to 3 stars.

Thank you to Black Chateau for providing me with this free copy in exchange for my honest review.