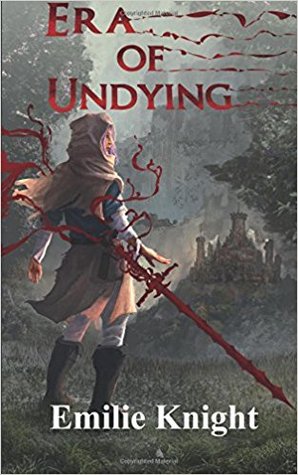 Synopsis: There hasn’t been a Blood Warrior for decades. Everyone assumed they were extinct and couldn’t return. Turns out they were just in hiding. Pen chose to revert back to her nomadic life after the death of her family. Life was always safer that way, away from people. Now she’s been caught and odd occurrences have been happening in Ichorisis. People are surviving horrible injuries and illnesses that they shouldn’t be. Now that Pen is under custody of one of the several kings she’s been sent to fix the problem. Whether she wants to or not.

Era of Undying was such a fascinating read! It was one of those that I read in one sitting and wished it had been longer! It was dark, intensely unique, and exciting! It offered themes of death, heroism, and justice, and was wildly entertaining.

Emilie Knight took me on a journey of sadness through a richly developed world. There were vivid details on every page, and twists and turns that made me feel, and made me want more! The story was bold and deep and took me completely by surprise!

I loved Pen and the originality behind her character. Without giving spoilers, I’ve never met a character that had abilities like hers. Not only did she have an insane ability, but she also had a very interesting, and scientifically biological, weakness. But, beyond her ability, and weakness, she felt real. She was strong and brave, and completely lost and vulnerable at the same time. She was beautiful, and I could see her becoming a beloved, kick ass character in a series like Celaena/Aelin.

This story reminded me a little of Beowulf. It had its own mix of mythology and horror alongside a heroic journey. It was a violent, gothic tale, that felt like it could have been told alongside Beowulf, or even The Odyssey. It had such vivid details that really brought it to life and made it into a new myth all its own. But, I also felt like it could have been an amazing graphic novel because of the nature of Pen’s ability, the intriguingly violent deaths, and the way I could visualize the entire story as I was reading it.

Era of Undying was unique and refreshing. I wish it were longer. I wish it were a series. I could see myself getting addicted to the world and the character of Pen. I already see myself re-reading this because it was action packed and gritty and so full of rich details that I know I would find things I missed the first time! I loved it and highly recommend it!

4 thoughts on “Era of Undying by Emilie Knight”