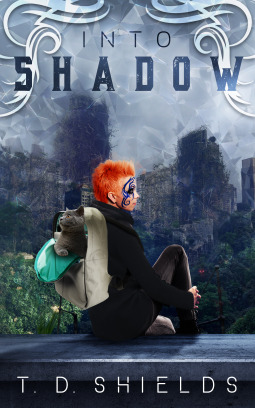 Synopsis:  She’s nineteen. The President’s daughter. They want her dead.

Poppy’s father may be the President of the North American Alliance, but that just makes her a target for those wishing to topple the regime.

Barely escaping with her life, she must travel across a country ravaged by war and climate change to seek safety amongst a people who only recently opposed her. There she must use every skill learned from her military upbringing to survive terrifying beasts, deadly plant life, and lawless gangs before finally finding a group willing to accept her.

But her peace soon proves to be illusory. It’s not only the government that wants her dead now.

Into Shadow is a must read for anyone who enjoys stories of politics, strong female characters, and post-war worlds. T.D. Shields created this vastly unique and vivid world where the government controls more than it should in certain areas of the world and, yet, knows nothing about the packs of people living in the city ruins. From the beginning we are thrown in to a world of betrayal and danger and are taken on a journey of survival and basic instinct. The title, “Into Shadow,” not only signifies the situation in which our main character has to leave her cozy, privileged lifestyle to escape to a darker, more dangerous world, but it also signifies the change from always being in the spotlight to having to keep herself hidden from everyone, as well as the change in herself as far as her mannerisms, appearance, and attitude.

After devouring this book, I have to say that I LOVE Poppy Walker! Her character is bold, courageous, intelligent, and beautiful! She is thrown in to this incredibly dangerous and terrifying situation and, instead of giving up, she fights to survive. She undergoes this incredible transformation from “Perfect, First Lady Poppy” to Bad-ass, Leather Sporting Poppy! She uses survival training given to her by her father, along with her brains, to keep herself alive and forms interesting friendships along the way.

I enjoyed the connection between Poppy and Sharra. Sharra has the amazing characteristics of wild hair, intense eye makeup, and a punk rock attitude to go with it all, and she proves to be a loyal friend and ally to Poppy. Even though they became separated for a period of time, Sharra had a positive impact on Poppy, which helped to shape her and guide her on her journey.

Roomie was my favorite character in the book. Being an animal lover, and firmly believing in the intelligence of cats and their abilities to understand humans and have their own personalities, Roomie spoke to my heart. Cats are notorious for being able to seek out the good in us and are able to spot evil. This makes the relationship between him and Poppy that much more special.