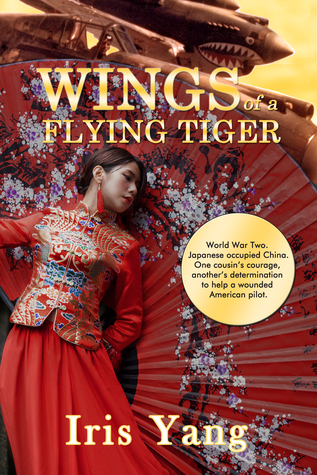 In the summer of 1942, Danny Hardy bails out of his fighter plane into a remote region of western China. With multiple injuries, malaria, and Japanese troops searching for him, the American pilot’s odds of survival are slim.

Jasmine Bai, an art student who had been saved by Americans during the notorious Nanking Massacre, seems an unlikely heroine to rescue the wounded Flying Tiger. Daisy Bai, Jasmine’s younger cousin, also falls in love with the courageous American.

With the help of Daisy’s brother, an entire village opens its arms to heal a Flying Tiger with injured wings, but as a result of their charity the serenity of their community is forever shattered.

Love, sacrifice, kindness, and bravery all play a part in this heroic tale that takes place during one of the darkest hours of Chinese history.

Wings of a Flying Tiger was fast paced and intense. It was full of horror, sadness, and acts of incredible bravery. It was a real eye opener to just how low man can sink in the throes of war and hatred, and how fear can bring people to work together.

This one was definitely hard to read. It was also a bit of a history lesson. I honestly had no idea a massacre like this had taken place in China. Though the story itself was fiction, it was based off the Nanking Massacre led by the Japanese in the 1930’s and 40’s.

The story was very fast paced. On one hand, it was a little too fast paced for me, sometimes jumping through time and not really allowing for much world building, but, on the other hand, it really did a great job of showing how horrific and chaotic this massacre was. This non-stop pace really threw me right in the middle of the horrors of the story.

The characters really came to life on the pages too. Also, learning that the characters were inspired by the author’s relatives who lived through this massacre made them feel more realistic and emotional. Jasmine and Daisy were so courageous and beautiful and I was so terrified for them throughout the whole book! Danny was such a brave man and I loved how he tried so hard to protect the people of China, and his loved ones.

This story was so heart pounding and quite terrifying. It never went in to too much detail as far as the rape scenes were concerned, thank goodness, but it definitely highlighted the horrors the women of China faced during this awful massacre. It highlighted the terror the Chinese military, and the people of China, had to face from the Japanese during the invasions, and it really showed how courageous the Chinese had to be during this horrible time.

What really kept me going throughout the story was the camaraderie between the characters and their strength and bravery. This story was so incredibly emotional and I was really placed in the moment of this tragedy. My heart broke knowing that the people of China had to live, and die, through this. Though the story was quite graphic, and very intensely paced, I’d recommend it to anyone who enjoys a good historical fiction about dark times and strong characters. 3.5 stars.

Thank you to the Book Glow Reviewers Program for providing me with this free e-book in exchange for my honest review.

3 thoughts on “Wings of a Flying Tiger by Iris Yang”