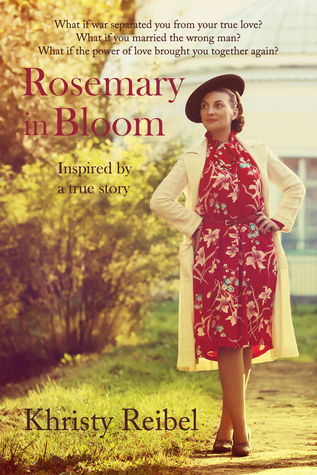 Synopsis: What if war separated you from your true love? What if you married the wrong man? What if the power of love brought you together again?

When Rosemary meets Albert it is instant chemistry. But it is also the summer of 1942, and scores of young men—Albert included—feel compelled to enlist to fight the war against Hitler. Albert wants to marry Rosemary before he leaves for Europe, but she just can’t commit. Like so many young women of her time, Rosemary finds herself left behind to work and worry, desperate for love but frightened of abandonment.

Three years later, and with Albert’s fate still unknown, Rosemary meets Harry, a charming and handsome man. Rosemary feels guilty for spending so much time with Harry, but she has all but lost faith that Albert will make it safely back home, especially when she receives news of her brother’s serious combat injury. Should she wait for Albert, or settle for second best?

Inspired by a true story, Rosemary in Bloom explores faith, forgiveness, enduring love against all odds, and the difficult decisions that strong, smart women on the home front had to make during World War II.

Rosemary in Bloom was such a powerful read. Reibel really did an incredible job of capturing the emotional intensity of this time period. I read this in one sitting and absolutely could not put it down.

I’ve always loved books written in this time period. Life was tough and poignant, but also full of passion and bravery. Men were courageously fighting for our country. Women were bravely fighting for their families, and love seemed to flourish more because it was all about living for the moment, fearful of losing the next. It’s inspired my vintage fashion style, as I’ve always felt it paid homage to the bravery of those who struggled during World War II.

Rosemary in Bloom managed to capture these feelings so beautifully. The story was captivating, and heartbreaking at times. It was full of life, love, regret, and courage. It truly reminded me of the strife and struggle of the times, but also painted a picture of human emotion and beauty.

Knowing that this was based on a true story made it that much more captivating. The characters had been through so much by time I finished the book, and my heart was full of sorrow and hope for them. Rosemary was a symbol of beauty and strength all while being emotionally flawed and a little broken. Albert was incredibly courageous and kind hearted, but also a little blinded by duty and loyalty.

This story wasn’t just about a hopeful, whirlwind war romance though. It was about family, faith, and listening to one’s heart. It highlighted the good and the bad from the time period, and in human relationships. It was truly a thing of beauty.

History wasn’t just about the major events that happened, such as presidential elections, deaths, and wars. It was about how those events affected people and their every day lives. Rosemary and Albert’s relationship was directly affected by the war and his decision to enlist. Women went to work in dangerous factories, and families lost loved ones because of the war. These events shaped these people back then, and, ultimately, shaped us as a society, and I think that Reibel really captured this beautifully in Rosemary’s story. 4.5 stars!

Thank you to Book Glow for providing me with this free e-book in exchange for my honest review, and as part of the reviewer’s program.