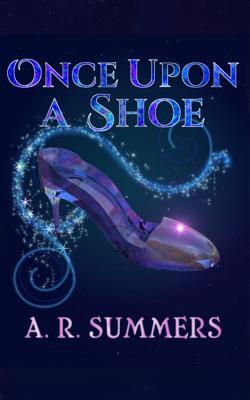 Book Title: Once Upon A Shoe

Synopsis: Magic shoes, family problems, and a midnight deadline… How much do you really know about Cinderella’s fairytale?

Ella always knew she’d marry for love or not at all. She wanted nothing less in a marriage than the obvious affection she witnessed between her father and her stepmother, Iris. But when her father disappears and Iris sinks into depression, Ella cuts herself off from the rest of the world as she struggles with her own emotions, a disgruntled stepsister, and an overwhelming workload. Armed with a fragile hope, she must go to the royal ball to find her father. But a reunion with her childhood best friend threatens to shatter the walls she’s built around her heart.

Crown Prince Aeden always hated his status. He felt like social engagements and propriety were a waste of his time and energy, especially with girls who were just interested in a crown. One such confrontation with Ella led to the start of an unlikely friendship. Over time, Aeden realizes that his feelings for Ella have evolved into something more. But before he can tell her, tragedy strikes and Ella pushes him away. When he finally sees her, Aeden is determined to do whatever it takes to not lose her again. He must convince Ella that they are meant to be together before his time runs out.

Stepmothers aren’t always villains and princes aren’t always charming. With so much uncertainty, do they have what it takes to create a happy ending?

The original tale of Cinderella, or the Little Glass Slipper was written in 1634 by Giambattista Basile, and published in Italy. The most popular version was published by Charles Perrault in 1697 (who first introduced the glass slipper), and later adapted by the Brothers Grimm in 1812 (where the brothers had birds peck out the sisters eyes).

Fun fact: The story of Rhodopis, which is about a Greek slave who marries the Egyptian king after he finds her slipper that an eagle stole is thought to be the earliest form of the story!

Once Upon a Shoe was an adorable read. It had some unique twists in comparison to the original tale, and the Disney version, and it had a fresh perspective on all the characters. It was a quick, easy read.

Though it didn’t have as much magic as I normally like in a faerie tale, it still had the moral lessons, and the happy ending. There was also one aspect of the story that both annoyed me slightly, but also made me appreciative of how the author wrote the characters of “Cinderella and the prince.”

Both Ella and Aeden felt so young, and a little childish to me. The book started out with them becoming friends at very young ages and progressed to about the age of 18 I believe. But, they both just felt really immature, and though their actions and behaviors annoyed me at times, they were also refreshing.

Thinking about the original faerie tales, and the Disney versions, most of these characters seem to be around this age, if not younger, but always come across acting like adults. So, though it irked my nerves a little, it was also quite interesting to see these characters actually acting their ages. They were both a little selfish, childish, and naive, but I think this helped them grow together and, in the end, they learned to see and appreciate what they had.

It was a refreshing take on a classic. It was a quick, easy read that had a lot of originality to it, despite being a retelling. It had some nice bits from the old faerie tale, mixed in with some Disney-esque feeling, a little bit of magic, and enough changes from the original that it could read as it’s own story if you weren’t familiar with Cinderella.

I found these on Pinterest and traced them back to the artist on Deviant Art. They were so cute and really made me think of Ella in our story since she was a bit more on the younger, naive side. 2 thoughts on “Faerie Tale Friday: Once Upon a Shoe by A.R. Summers”