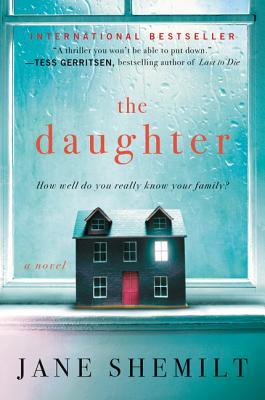 Synopsis: A riveting psychological thriller about a mother’s obsessive search for her missing daughter

A mother driven to the brink by uncertainty . . .
A family that was never quite as perfect as it seemed.

Jenny is a successful family doctor, the mother of three great teenagers, married to her loving husband, Ted, a celebrated neurosurgeon.

But when her youngest child, fifteen-year-old Naomi, doesn’t come home after her school play, the seemingly ideal life Jenny has built begins to crumble. The authorities launch a nationwide investigation with no success. Naomi has vanished, and her family is broken.

As the months pass, the worst-case scenarios—kidnapping, murder—seem less plausible. The trail has gone cold and the police have more pressing cases to investigate. Yet for a desperate Jenny, the search has barely begun. More than a year after her daughter’s disappearance, she’s still digging for answers—and what she finds disturbs her. Everyone she’s trusted, everyone she thought she knew, has been keeping secrets, especially Naomi. Piecing together the traces her daughter left behind, Jenny discovers a very different Naomi from girl she thought she’d raised.

Jenny knows she’ll never be able to find Naomi unless she uncovers the whole truth about her daughter—a twisting, painful journey into the past that will lead to an almost unthinkable revelation . . .

Content Warning: Drug use, loss, grief, sex with a minor

I have to admit, I got about a third of the way through this before I really started to get invested. It had a slow start, and the jumping back and forth between present and past wasn’t really what I was expecting at first. But, slowly, the author started to build the story and unravel bits and pieces of the mystery behind Naomi and her disapperance.

I honestly think what ended up keeping me reading the most was seeing how Jenny kept learning that she didn’t know her family at all. Secrets were revealed, choices were made, and it was as if she lived with strangers. She was a stranger herself, not really living in the moment with her family until it was too late.

The Daughter was an interesting story that really showed the reader the moral of not letting things pass you by, as well as bringing to light how negligent parenting can cause a huge downward spiral. Jenny was so caught up in her career that she missed so much. Same with her husband, though it seemed that the book tried to lay the blame mostly on Jenny. Parenting takes two, if both are present, so I’d say he was equallly at fault for missing so many details about their children, and each other.

A lot of the book felt predictable, and a little bit forced. The characters could have been given a little more personality. A few of the twists seemed too conveniently planned. But, that ending, though predictable, especially for Lifetime movie lovers, was also still shocking and kind of saved the book a little for me. The Daughter was interesting enough that I will be reading The Playground (though, I do have to admit that these books weren’t even on my radar until actor John Barrowman mentioned he was reading the latter, lol.)